Thought I would have a go at entering a new company to the BB. If you don’t like the oil and gas sector look away now!

TXP are incorporated under the laws of Alberta, Canada with its head office located in Calgary, Alberta. They are an oil and natural gas exploration and production company active in the Republic of Trinidad and Tobago. Currently one of the largest independent onshore oil producers in Trinidad, with assets in several large, high-quality reservoirs that have significant internally estimated total petroleum initially-in-place and an extensive inventory of oil and natural gas development and exploration opportunities. The Company’s common shares are traded on the Toronto Stock Exchange and the AIM market of the London Stock Exchange.

They have a series of legacy oil wells that produce 1344 bbls/d but they have multiple discoveries that are being finalized (production) and will hopefully drastically increase that number to nearer 10,500 boe/d. They have had a rather erratic share price run over the last couple of years (20p area to 170p and now back to 80’s). Anyone looking for a long term hold in the sector could be rewarded if they check out the latest presentation and words from the company here: 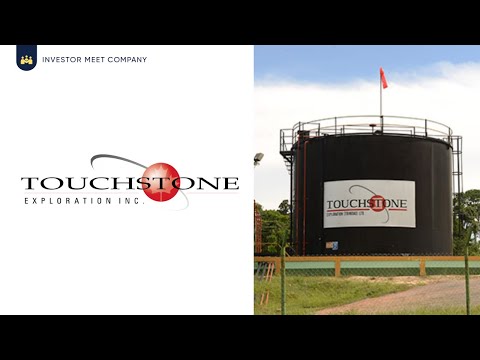 Down the road TXP may be a lot larger, generate a lot more oil and gas and even pay a dividend. Hope this idea is of some interest to members.

PS. A director actually bought some shares at 85p in the market per an RNS today. Not a big buy but they rarely put their hands in their pockets (bad sign) so this is at least a bit more encouraging.

Thanks for the write-up. I am not an O&G investor but looked anyway!

Anyone looking for a long term hold in the sector could be rewarded if they check out the latest presentation and words from the company here: 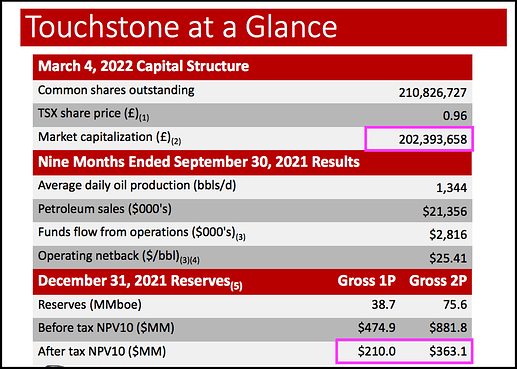 That suggests the share price adequately reflects TXP’s proven reserves, so anybody buying now is hoping that the probable reserves (and then possible reserves) eventually come good. Daily production is 1,334 = about 500k/yr, so 1P reserves of 38.7m suggest a field lifetime of 77 years – is that right?

But I see reserves have been growing…

…and there is a tantalising $1.3b NPV10 valuation on a 3P basis which after tax could be c$575m. I can’t do the exact maths, but buying at a $265m market cap suggests much more than 10% annualised returns from that NPV figure – assuming of course the probable and possible reserves eventually become proven and go into production. Presumably you are confident of proven reserves continuing to grow?

Unlike you I am not a “numbers” person so the financials I leave to those like you who have a better grasp of figures. There is an excellent post on predictions and figures from an accountant and someone I am less familiar with on the ADVFN board which I repeat here for interest, so not my work, please note!

Realistic: £1.20 to £1.50 (yes would like more, but surely some factored in?)
Possible: up to £2 (if markets bullish and investor sentiment returns)
Unlikely: £2+ (market gets a bit ahead of itself?)

2023 with further ‘unquestionable success’ at Royston Deep (i.e a ‘good’ hit or two in the sub-thrust and further delineation of intermediate productivity):

A prolific hit at Kraken, with flow rates in the thousands bpd?

Combine with further any significant exploration success at Steelhead, Gaubine, Bass, or Chinook (turns into a world class oil find instead of a world class gas/water disappointment i.e another Cascadura size commercial find).

The following reply was also posted (more on the production figures + relevant prediction of figures):

BACK OF MY NAPKIN
Legacy Production- 1336 bpd
Using a conservative net back of $25/bbl at present prices, we had annual net earnings of $6.5M. If we assume that legacy production remains the same for all the doubters out there. The EPS was $0.03 for 2021.

Normally for oil and gas companies PE ratios are not used due to companies in the sector running with high debt. But TXP doesn’t have a lot of debt. Typically for O&G companies PE ratios average about 15. So using this ratio, it means that we should see the share price rise to at least US$3.75 by the end of 2022. And, assuming the Money Machine cranks up at least 3 fold by the end of 2023 and Coho 2 comes online, we are gonna be looking at EPS of about $0.75 which should support a share price of about USD$11.25.

All of this doesn’t include one barrel of oil from Royston.

So I agree with the tantalizing point you mention in the last paragraph based on current 3P figures. However, the potential in the Ortoire block is HUGE. There are so many prospects and so far they have done brilliantly with the drill bit. The delays monetizing the first two finds have created weakness in the price & there is a fairly large short on the stock at the moment too. Once these are closed (reduced) & news comes of the first income from Coho then Cascadura I think we should see a return in sentiment towards the company & a higher share price. After that the development of the Cascadura find + other new tragets around Coho that were mentioned in the last presentation (new targets!) will just keep adding to the story. As I said, long term should be kind to share holders. I certainly hope so anyway!

Recognise you are not a ‘numbers’ person, but I have learnt the numbers can give a greater understanding of what’s going on with a company!

Not a sector expert, but PE ratios may also not be used O&Gs due to the finite life of their fields – hence the references to those NPV calculations. TXP has gross debt of $30m (with interest at almost 8%pa), which may not be a lot in terms of the NPVs cited in the presentation, but is a lot when annual operating cashflow has run at $2m for the last two years: 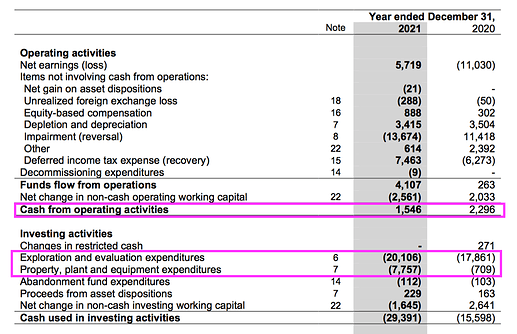 I note some hefty capex spend during the last two years, too. Questions are what levels of capex are required during the next few years, and will the new fields come on stream soon enough to fund any further hefty expenses?

This RNS contains some useful snippets:

All of the required agreements with our third-party partners to allow for the final tie-in of the Coho gas field on the Ortoire block have been executed. Pipeline installation operations have commenced with first gas anticipated in May 2022 subject to weather delays that may hinder trenching and welding operations. Following testing and purging of the pipeline, we are anticipating natural gas production to increase over time to a gross target of 10 MMcf/d (8 MMcf/d net, representing approximately 1,333 boe/d net production).

So the 1,333 bpd Coho production cited by the ADVFN contributor is a target to be reached “over time”, and the $4.8m projected free cash flow will not be achieved straight away. I am not clear how the ADVFN contributor gets to $4.8m FCF from 1,333 bpd via Coho when 1,333 bpd from the existing operations give c$2m operating cash flow. Maybe economies of operational scale kick in, or differing royalty agreements are in place.

The following text suggest further capex is required before Cascadura gets going:

The Cascadura facility is proceeding with the major facility components nearing completion for transportation to Trinidad. The components will be delivered on skids and will be assembled in the field by local contractors. In parallel with the facilities procurement and construction, we have submitted the required regulatory application and expect to receive a response on or before mid-May 2022. Upon approval, we will proceed with four distinct projects at Cascadura: road construction, condensate pipeline construction, facility construction and construction of future development drilling locations.

The delays monetizing the first two finds have created weakness in the price & there is a fairly large short on the stock at the moment too.

Could be worth finding out why the large short position exists. Do the shorters believe TXP will need more money before the new fields start producing?

Recognise you are not a ‘numbers’ person, but I have learnt the numbers can give a greater understanding of what’s going on with a company!

I get it, believe me. My brain, unfortunately is not “wired” that way. My father was a chartered accountant but I certainly didn’t inherit any of the genes in that area!

The capex is high now as they have been spending on a new rig and the infrastructure in preparation for monetizing Coho and Cascadura. This should be reducing going forwards and The National Gas Company (NGC) of T&T are covering certain costs per their contracts/agreements with TXP. There is already an agreement in place for NGC to take all the gas produced by TXP, so they have an incentive to make sure their side of the deal goes smoothly. At this moment gas is in demand as we all know!

Could be worth finding out why the large short position exists. Do the shorters believe TXP will need more money before the new fields start producing?

Given the share price reaction yesterday this may be reducing further now. I think the reasons for the shorts were more to the anticipated deadlines or targets mentioned by the TXP BOD being considered unrealistic. This has turned out to be true and weakness has resulted. The BOD have now stated that their policy is understate and over-deliver rather than promise timelines that cannot be met. That should also help if true. There was mention on one of the BBs that it may also be a certain hedging mechanism. Playing the share price both ways by one or more instituitions. Not sure whether factual or not. But would not dismiss it!

Thanks for your continued interest. A bit quiet here, but hopefully will attract more attention as the story unfolds