Should I (or You) Buy The Buffettology IT?

A very helpful article by ITInvestor.co.uk about the upcoming Buffettology Investment Trust IPO.

I must admit to considering this trust when the news first broke. Run by Keith Ashworth-Lord (KAL), the Buffettology open-end fund has been a star performer since its launch in 2011.

The chart below compares the main Buffettology fund to my portfolio and the FTSE 100 since the start of 2015: 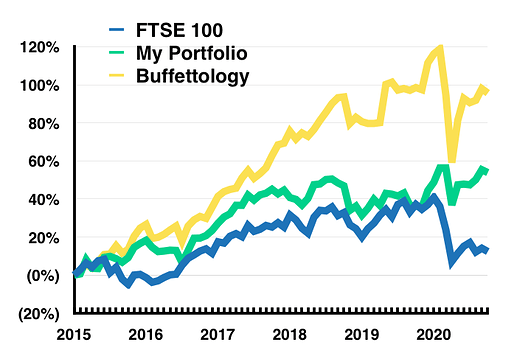 The outperformance by Buffettology is even greater than the chart suggests, as dividends are excluded from the fund’s performance but are included in my performance and that of the FTSE 100.

Attractions to backing KAL and the new trust:

This new IT could perform even better than the main Buffettology fund. The trust will look to invest in shares with market caps of £20m-£500m, and calculations by KAL indicate the Buffettology investments that met that market-cap criteria at the time of purchase outperformed the main fund significantly:

The IT Investor article reminds me the trust could trade initially at a small premium (initial price 100p/share less 2p/share launch costs = 98p/share nav) when similar-ish trusts trade at a discount.

“I’ve got three trusts in this space already, all of which have recently been trading on double-digit discounts, as do many other UK-focused investment trusts.

Admittedly, the discounts on all three of my holdings (Henderson, BlackRock, and Acorn Income) have narrowed considerably over the last week.

Even so, it’s hard to justify loading up on a new trust that’s immediately going to be at a small premium, assuming it begins trading close to its issue price.”

Also, the trust “intends to invest in between 30 and 50 portfolio companies (with a maximum of 60).”

The main Buffettology fund has 31 holdings and the Free Spirit sister fund has 27. So this new IT will be relatively diversified, which perhaps is not the typical Buffett way of investing.

The article also mentioned the 1,000%-plus gains from Liontrust and Games Workshop, which may have had a sizeable influence on the performance of the main Buffettology fund.

I would argue neither LIO nor GAW offered true Buffett-type attractions at the time of their original purchases. But perhaps KAL saw something me and most others did not. Finding the ‘next GAW’ may be tricky as well.

Applications (at least via AJ Bell) must be in by this Friday (23 Oct).

Part of me thinks I should be handing some money over to KAL as he is most likely a better stock-picker than me (at least during the last five years).

But part of me thinks there are multi-baggers such as Tristel out there waiting to be bought that would easily outpace a 50-share fund.

Is anyone investing in this new Buffettology IT? Your thoughts would be welcome.

I am very sceptical about this. For me the jury is still very much out on Keith Ashworth-Lord. His Buffettology fund had just 50m AUM four years ago. As he has attracted capital, he has continually re-bought what he owns, having prolonged and significant market impact on his stocks, pushing their prices ever higher, improving his performance, and thus attracting more capital, which he then uses to buy more of what he owns, pushing them up further, in a virtuous circle.

I calculated that from the point that he went disclosable in BVXP (Aug 2017) to the point at which he stopped buying (Jun 2019) he bought 15% of all shares traded in the market in that period, continually and persistently, over 22 months! That is huge. The shares have flatlined since, which is perhaps coincidence.

He won’t be able to perform this trick in a closed-ended fund and therefore he is not going to have this huge tailwind. I’ll be watching keenly from the sidelines, but he won’t be getting any of my money…

If redemptions come in his main Buffettology fund at any point, I’d be be a very nervous holder of some of his larger positions, as he just won’t be able to sell them quick enough, and will have potentially large impact on them on the way down. I hold BVXP personally and this is absolutely the #1 risk factor for me.

I am very sceptical about this. For me the jury is still very much out on Keith Ashworth-Lord. His Buffettology fund had just 50m AUM four years ago. As he has attracted capital, he has continually re-bought what he owns, having prolonged and significant market impact on his stocks, pushing their prices ever higher, improving his performance, and thus attracting more capital, which he then uses to buy more of what he owns, pushing them up further, in a virtuous circle.

Thanks for the insightful reply. Good point on the AUM. KAL did indeed have £50m AUM four years ago:
Buffettology Fund Fact Sheet 2016.9.pdf (1.6 MB)

I guess once the five-year track record was established, the institutional/IFA money etc started to roll in.

Good point too on the virtuous circle buying. I had not thought of that. Mind you;

i) he won’t have pumped up other, larger, winners such as GAW all on his own,
ii) many ‘quality’ shares not in the fund also trade at 30-40x ratings, so the market has lifted a lot of boats

I must admit I do like his conviction with his investments, but yes, he will not be able to get out quickly if need be. He sold Air Partner right at the bottom in March and Rev Bars close to the bottom as well.

I suppose he must ensure he is in the right companies to begin with, where the ‘economic moat’ will not be breached and therefore not have to ‘panic sell’ a huge stake if things go wrong. Can he find 50 or so UK smaller companies with such durable-moat traits currently selling on fair valuations?

Redemptions will probably kick in if/when the fund undergoes a period of underperformance, which may well be due to his holdings experiencing their own trouble. So him selling, say, BVXP will only compound the company’s share-price woe. So as a fellow BVXP holder, we either have to get out before KAL or hope there’s no moat trouble.

Applications (at least via AJ Bell) must be in by this Friday (23 Oct).

In the end I did not apply.

News today that many others were not persuaded:

“The Company has received a broad level of support from a significant number of investors and has been encouraged with the response to the investment proposition, however, overall demand has not been sufficient to meet the Minimum Gross Proceeds set out in the prospectus published by the Company on 30 September 2020”

Similar story for this Tellworth trust a few weeks ago:

Is the reluctance for investors to back these UK small-cap trusts a signal that UK small-caps might actually be a good contrarian investment? Or were the trusts shunned for good reason? Looking at the updates from my portfolio, I think there are grounds to be optimistic that well-run, well-financed businesses that have been impacted by the lockdown will gain market share and recover strongly once the pandemic has subsided.