I enjoyed this PI World/Stockopedia StockSlam event earlier this week:

Paul Scott presented Renold (RNO) at 29m13s, which attracted my attention due to the apparent P/E of 3.5x. The next day Renold was trending in SharePad, so I was not alone: 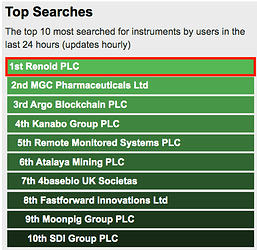 Paul did mention the pension deficit as the ‘elephant in the room’, so let’s take a closer look at RNO’s 2020 pension numbers.

This note from the annual report shows scheme assets of £142m and (the net present value of estimated) liabilities of £239m giving a deficit of £98m:

The £98m essentially represents the benefits the scheme is expected to pay beyond what the scheme assets are able to fund. RNO is on the hook to find that £98m from somewhere.

For valuation purposes, arguably investors ought to add the £98m deficit to RNO’s (£33m) market cap. That way you (in theory!) acquire RNO and, with an extra £98m to hand, have a properly funded scheme, no ongoing pension-obligation worries, and see no further cash diverted into the scheme.

Calculating future pension liabilities does of course involve lots of guesswork, and that £98m figure could eventually prove far too excessive. Perhaps RNO can in time generate enough cash by itself to bolster the scheme’s assets and fund the projected liabilities.

Comparing the scheme’s current contributions, benefits and assets provides some extra perspective as to whether RNO can self-fund the scheme.

… and you can see the scheme’s assets were £30m higher at £171m a few years ago, and the income received from the assets has since declined from more than £5m to less than £4m. Benefits paid have in the meantime remained around £11m. So RNO’s recent asset erosion is not encouraging. Clearly a crunch point will eventually occur if benefits remain at £11m a year while the scheme’s assets keep on declining.

That earlier note also shows pension contributions of £3.2m and annual benefits of £11.1m, which implies the fund requires an annual total return of £7.9m to ensure the assets are not eroded:

From these figures, RNO requires a £7.9m/£142m = 5.6% annual return from its investments to prevent asset erosion. 5.6% is relatively high for a pension scheme* and may be difficult for RNO to achieve given the scheme’s weighting towards income-producing assets:

The note above shows £82m of the £142m assets are income-focused investments such as insurance policies, bonds and gilts, which I presume are held because their income streams are matched against certain scheme liabilities.

(* A few years ago I calculated the typical blue chip’s pension required an annual total return of 2.6% to prevent asset erosion).

Adjusted operating profit was £13.4m, and I would argue this £13.4m ought to be reduced by £4.4m – or 33% – for valuation purposes to reflect the ongoing scheme cash expense.

But are the current pension contributions adequate? I would say not.

If we are to mitigate the risk of further scheme asset erosion, then arguably the contributions ought to be lifted by up to a further £4m to get much closer to the £11.1m annual benefit.

Suddenly you can imagine RNO’s cash pension costs being up to £8m a year, most of which would not be expensed against the reported adjusted profit of £13.4m. In this scenario maybe RNO’s true cash operating profit would in fact be c£5m?

Bear in mind RNO’s scheme funding agreement is very long term – it is based on an intercompany loan that lasts for 25 years to 2038:

Note, too, the scheme can take £1m of profit beyond £16m, and claim the equivalent of 25% of any dividend paid. These agreements tell you a lot about the scheme’s funding position and how it will sap future returns that ordinarily would flow to shareholders.

All told, I can’t arrive at a P/E of 3.5x following these adjustments. But if operating margins do take off as Paul suggests, then maybe RNO’s much higher profits will then lessen the significance of the scheme’s obligations.

Not ideal news from Renold. The auditors are taking a good hard look at the accounts.

The Company will provide a further update on trading at the time of release of its preliminary results for the Year on 8 June 2021.

A May update revised that to 17 June:

Following a request from its auditors, Deloitte LLP, as a result of the impact from Covid-19 remote working, the disruption caused by the resurgence of the new Covid-19 variant in India and in order to provide Deloitte sufficient time to complete the audit process, the Company’s final results will now be published on 17 June 2021 .

And now we have a further delay, with no date set:

Further to the announcement of 28 May 2021, the Group’s auditors, Deloitte LLP, have requested additional time to complete their audit processes. As a consequence, the Company will not publish its results for the year ended 31 March 2021, on 17 June 2021, as previously advised, and will issue further guidance as to the new announcement date in due course.

Note there was no reference to Covid this time. Will be fascinating to discover what has caused the delay. Other companies do not seem to be too hampered by audit delays at present.