Onthemarket (OTMP) is not a company I know much about and without doing a lot of research it is hard to determine if it would be an interesting prospect. But I thought I would outline some background pointers for those willing to put the time in.

Now on paper, OTMP seems to be a poor choice because it generally pays to go for the market leader, which in this case is Rightmove. The third or fourth player in an industry will struggle to make any money. But the online advertising platform market is highly profitable and as such a weaker player may still do well.

OTMP is also interesting as a David vs. Goliath-type story. Can a smaller player usurp an established player? This tends to happen when the new player has a very different business model such as with Netflix versus Blockbuster Video. OTMP and Rightmove have similar business models.

But OTMP seems to be much cheaper for estate agents to use which could see it gain market share. The group then needs to attract the attention of property hunters (renters and buyers). One possible issue is that OTMP seems to issue shares to estate agents, which results in dilution over time.

Much like some properties in Estate Agents’ windows, OTMP looks interesting on paper. But on close inspection all may not be as good as it seems. I thought I would post this here in case someone wants to do the work or has any thoughts on OTMP. It seems that they can be profitable with just a small % share of the market.

Ideally, I would post my thoughts on the company after having done a lot of research. But running the website (Fund Hunter) may mean that I never get around to doing that. What stands out is that the online advertising platform model is extremely attractive, which makes OTMP worth a second look IMO.

But like any new upstart taking on an established company, things can easily go wrong with investors ending up with a zero. Who now remembers Virgin Cola? Feel free to pick holes in this very flimsy of investment ideas! Really just an initial thought on a company. 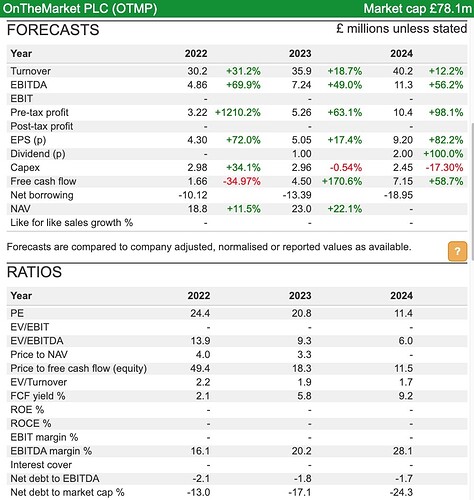 I think one of the key challenge for OTMP will be in growing their leads faster than their ARPA growth. Right now they are at a big discount to Rightmove, but the company has had trouble growing their branch count recently as they go back to the full priced offering, indicating that many agents don’t view it as being good value despite being significantly cheaper.

The company seems to be trying to go down the Zoopla route, by adding estate agency software to be more than just a portal, but so far, it’s too small.

I’m happy to look at this because I hold RMV.

To me, RMV appears to me to be winning the battle with OTMP.

Looking at the various percentage changes for the last 6 months interims of each company (which are comparable, 6 months to 31 July 21 for OTMP vs 6 months to 30 June 21 for RMV):

OTMP appear to be taking market share and are cheaper than Rightmove for estate agents.

I personally don’t think OTMP are taking market share. It’s just a very buoyant market for all the players.

OTMP appear to be capitalising on the unpopularity of Rightmove.

I don’t think OTMP will be as popular with the estate agents now because they are taking free advertising away. This is partly why the number of advertisers for OTMP declined by 5%.

It’s difficult for OMTP to compete when RMV has 1,400m website hits vs 159m for OTMP (and RMV’s hits increased at a faster rate than OTMP’s).

I believe popularity and brand recognition of RMV with the public at large is much more important than their popularity with estate agents. This discussion about estate agents hating RMV may be moot because they will pay for what works. They have no choice, and if RMV continues to be the ‘go to’ portal for the public it doesn’t matter who the estate agents like - they tend to be practical people at the end of the day. (Just my opinion for what it is worth!).

My feeling is that if RMV felt seriously threatened by OTMP, RMV would respond aggressively. It has the firepower to do so, especially if it halted the share buy-backs of £128m per year. This would allow it to cut the estate agents some slack on the prices as well as upping the advertising spend.

I hope the above helps and saves you time. It’s helped me, anyway!

Very interesting. That really is my working hypothesis as well that Rightmove will continue to prosper. Ordinarily I would view a third place player as something to avoid like the plague. But OTMP appear to be profitable.

I agree with you that this is really customer led. Zoopla have done reasonably well as the second largest player. My initial concern is that OTMP would not become profitable. Now if OTMP can capture a little bit of the consumer headspace on a sustainable basis then maybe it can have sustained profitability.

I pretty much had all your concerns but then I saw the newish CEO at Mello who seemed very credible. As someone else pointed out here, OTMP are also selling services to estate agents. Looking at the accounts I guess we can question whether they are even profitable?

OTMP put forward adjusted profits before share-based payments. But if their business model is to continually issue new shares to agents then this is an ongoing cost of the business. Really for OTMP the key is to capture some consumer headspace. I think they are hoping to achieve this through additional TV adverts.

But the problem is what incentive does a consumer have to search on OTMP versus Rightmove? In fact they probably have a disincentive given that Rightmove will have more properties. My initial thoughts on OTMP were that it was best avoided. It still seems very risky but I was impressed by the new CEO’s pitch.

This might be a warning sign more than anything else! Forming a view on stocks according to how good the CEO is at pitching is probably not a sound approach. Probably I won’t ever buy this share myself but it will be interesting to follow. It is generally best to go for market leaders like Rightmove.

Yes, Jason Tebb was quite bullish and persuasive at ‘investor meet company’ too - which is his job, I guess.

It’s a shame they haven’t done as well as RMV. You could be forgiven for thinking OTMP were thrashing RMV, from his presentation imo. 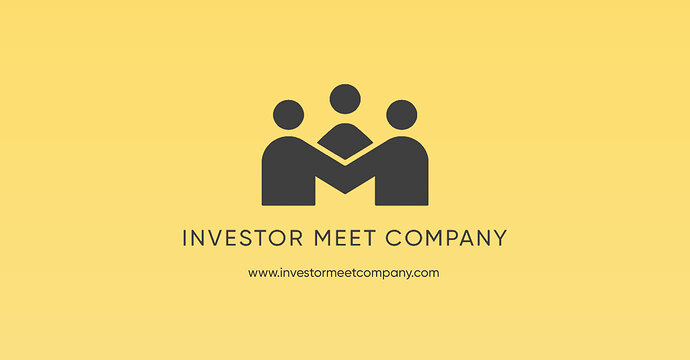 Live, interactive presentations, with management, from UK listed companies that matter to you, regardless of the number of shares you own, or where you live.