Multi-baggers tend to have price drops along the way. Could this be one, having had a 50%+ price drop from it’s all time high?

Baillie Gifford may think it is a possibility, holding 4.7% of the share capital, which is currently worth around £450m

The investment case according to Ocado, is that the grocery industry is the largest global retail market, and on-line is the fastest growing channel within groceries. Ocado partners with, and issues licences to, retail partners globally, providing robotic and software solutions.

Licence fees are still a small proportion of sales, with the vast majority of EBITDA coming from their retail division.

Ocado say they are the largest pure-play on-line grocery business, but partnered with a physical grocery retailer, Marks and Spencer, the fastest growing grocery retailer in the UK, they say.

Free cash flow is going through the floor due to the capex.

Directors are paying themselves, but collectively only own only 13% or so of the company, with one Director owning 9.5%:

I don’t see any difference for the customer at present in cost or quality from any on-line grocer. As such, grocery delivery is a commodity and it doesn’t really matter who one was to order groceries from. For example, it’s possible to arrange a Tesco delivery for a few pounds, they always turn up, in my experience with the right stuff. Tesco as a company is turning a profit, unlike Ocado.

On the other hand, 30% of the UK shopped online for food in 2019 vs 15% back in 2009 ,and the licensing of their technology for internet shopping to other grocery retailers is where Ocado see their future, rather than their retail division.

For me, personally, I am already disinterested in this company as an investment proposition. If one were interested then maybe look at the market opportunity from physical grocers who don’t have an on-line capability, whom Ocado could help, and build some sort of sustainable platform business?

Possible competition from the mighty Amazon should also be considered, imo.

To sum up, the prospects for Ocado seems to be more as a technology company, using UK retail sales as a test-bed to enhance and tech advantage they may have, rather than a grocery supplier…

I may well have to eat my words in the future, but I don’t see it working out well for current shareholders.

This works out to £5.4m per year per director, on average.

I recall OCDO’s Growth Incentive Plan (GIP) causing some headlines a few years ago. Checking back through the archives…

…the company awarded 6 million nil-cost options that would all come good if the share price compounded 20% ahead of the FTSE 100 for five years. 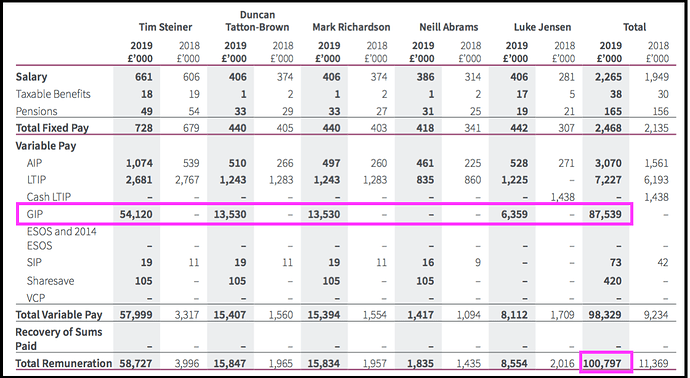 £87m seems a lot, but shares in issue when the GIP was devised were c620 million. So 1% dilution from 6 million extra shares for what turned out to be a 5-year 33% CAGR. I think I would accept that CAGR for that dilution!

The current Value Creation Plan is not expected to payout at all at present. 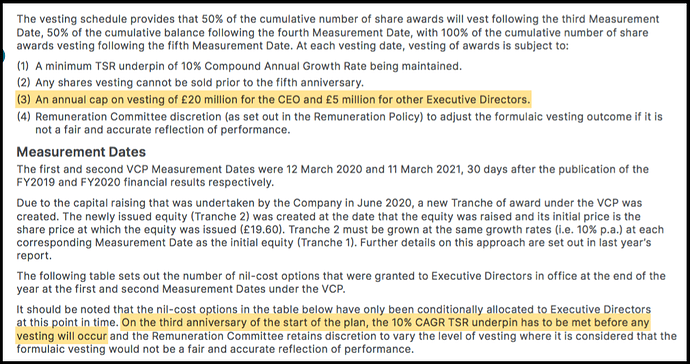 At least this time there is a cap on vesting amounts: £25m pa for the execs, which I think limits their payout to ‘just’ £75m over the 3-year vesting period!

Thanks for the reply.

I much prefer the HLMA scheme, based on ROTIC and EPS:

or BLVR, apparently based on increased EPS and EBITDA enhancement:

If only because these schemes focus the exec on improving the business.

To be fair, OCDO can’t have EPS incentives because the company is unprofitable.

However, turning the rationale for TSR schemes on it’s head, I don’t think the Ocado Directors would say they were underperforming (or doing anything differently) during the year to Feb 22: 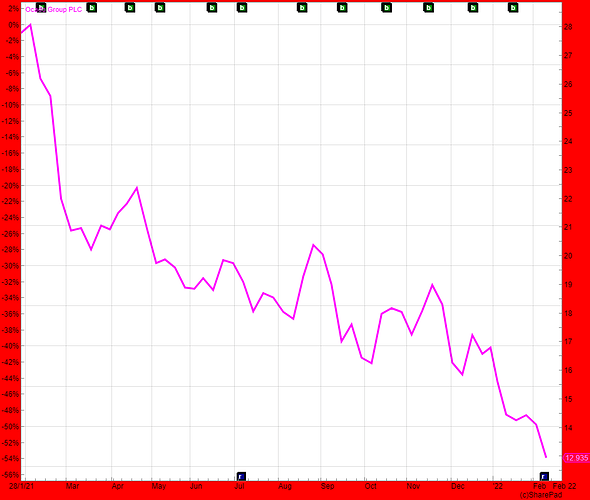 Ocado is a difficult businss to understand - too diffiucult for me.

I think the best way to think about it is that the UK grocery operation is one large proof of concept for a comprehensive grocery ecommerce service. Worldwide even the largest grocery business lose money on home deliver/ecommerce largely due to the cost of fulfilment. Ocado’s system offers a potential solution. Grocery ecommerce systems are very complex. There is the front end web interface with the customer (ease of use, maximising basket size etc…), grocerty logistics (multiple sizes, frozen, perishable, lots of items per order) and then delivery (drops per van, delivery times etc…).

Ocado one of the few wholly integrated grocery ecommerce systems - it was designed that way from the start. Most of the others are stitched togetether combinations of ecommerce providers, mechnical handlers and logistics systems. A notable competitor is Autostore, but it tends to focus on dry goods rather than groceries. That has not prevented various IP clashes.

There are various alternatives. I think Tesco uses its own software with Dematic handling systems. There is also a debate over the merits of large facilities that serve a city or smaller local operations often attached to an existing supermarket that would serve part of a city with shorter lead times. Ocado appears to be a leader in the former, but there are competitors in the smaller format to Ocado’s Zoom (e.g. Alert, Fabric).

The Ocado investment thesis involes appaising the merits of the roll out of this system (nearly 20 years in the making) in developed grocery markets accross the world (where labour/fulfilment costs are high). It has a number of notable partnerships (e.g. Kroger in the USA). This is beyond my circle of competence, and apparently that of most UK financial journalists who insist on focusing on the UK operations, but James Anderson at BG believes Ocado is one the very few UK tech companies that has the potential to be a global leader. British investors seem less enthusiastic about these types of company than their US counterparts.

I have a hunch (nothing more) that this is a good time to buy with the major risk around execution: for relatively young companies, convincing “blue chip” customers that you have leading technology is one thing, executing on a global scale is another.

I will watch from the sidelines with interest.