How is everyone coping with the sell-off today?

I feel I should just stop looking at screens and read a book rather than selling anything because:

I don’t have any personal gearing

My companies have little debt

My investments are quality companies and not covid recovery stocks such as airlines or cruise companies.

I have enough to live on so I will not need to sell in the near future.

The press are jumping on this, which may mean it is too late to do anything or the problems are overstated?.

Having said that, not selling anything now is quite the commitment because it may get alot worse before it gets better. The worst thing to do would be to not sell now and then be panicked if there is a 20%+ drop later on and sell at the bottom of the trough…

Possibly I should ban share price monitoring until March, and just read the portfolio rns for any permanent damage? Easier said than done, though!

How is everyone coping with the sell-off today?

Mind you today’s c3% drop follows a rough few months as the froth has been blown off some toppy valuations. As noted here…

I recently wrote about share prices ‘consolidating’ on my blog. “Quite often a share price runs ahead of the company’s performance and then stagnates as the company catches up. Trouble is you never know when the consolidation period will start and when it will end. Investing for ten years undoubtedly involves watching prices tread water for long periods.” [2021 Q2 TFW sharepad share price] As well as FW Thorpe, another of my shares, Bioventix, seems to be in a consolidation phase. Its price…

…many quality shares have been going sideways (at best) for some time now.

Anecdotal evidence from the usual channels indicate a number of private investors are struggling in a market where quality/growth/momentum no longer guarantee good returns. In my own portfolio, Bioventix (BVXP) and Tristel (TSTL) are down 20%-plus YTD – so much for healthcare being a safe haven!

With this new variant, I am not too worried as collectively we have (just about) handled the initial virus and overcoming a second ought to be more straightforward with the knowledge/experience since accumulated.

Nobody really knows what will happen, and all you can do is keep to (or develop!) an investing strategy that you feel works in (or at least survives!) all types of markets. Difficult markets do sort the PI wheat from the chaff! Personally I like to monitor choppy/downward markets as that is when the best buying opportunities occur.

It seems to me that the markets tend to be jittery towards the end of the calendar year, possibly because people are trying to manage exposures and close positions before the Christmas period. However, it seems to have started a bit earlier than normal. The last 2 years have been quite difficult to navigate, not helped by governments sloshing money into stagnating economies. There are shares that just seem to keep rising, some that have soared and crashed while the rest are fluctuating fairly randomly. At the moment it looks as if “normal times” might never come back and there is a real danger of inflation setting in. The normal advice of setting stop-losses is probably not the right way of handling the problem because with these erratic markets, you will probably find yourself holding way too much cash. I am just slowly accumulating positions in what I think are good businesses and trying to get some cost averaging benefits

Omicron appears to have been discounted as a threat to companies by the markets, today.

Sometimes I trust the markets to give a better indication of where we are going to be tomorrow than the BBC news.

I’m sure we will have a different crisis before long! These newspapers won’t sell themselves.

Looking at the FTSE250 ex ITs, prices remain quite high despite an 8% drop (which, incidentally, is nothing like the near 34% drop in March20, when Covid initially hit the markets). 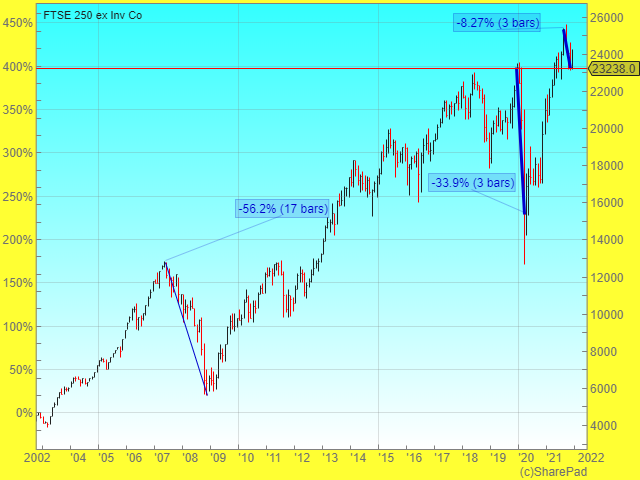 PE-wise, the FTSE250 is still over-extended, suggesting either share prices are to decline or earnings are going to increase overall during the next year or so: 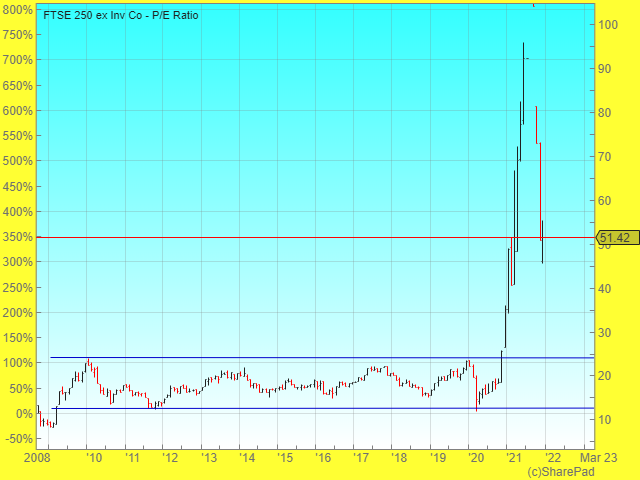 Based on the below video, I think earnings will increase more strongly than any price decrease as recovery sets in. This is because Omicron appears to be milder than Delta, and Omicron will push the Delta variant toward extinction because Omicron is more transmissible.

I would recommend watching Dr John Campbell’s Omicron update here, even if you were to just watch the first 5 minutes or so - it seems quite reassuring. 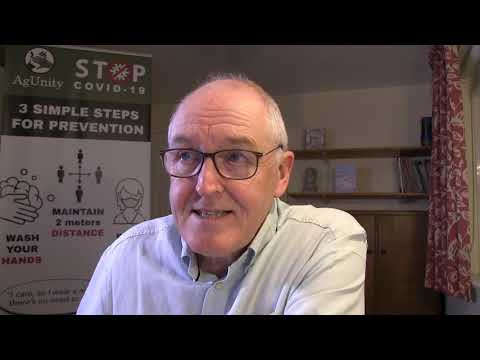 I watched the first 5 minutes as you suggested. He seems quite relaxed about the possible low impact on hospitals and deaths.

Contrast this with, 5 days on, Dr David Nabarro (Special Envoy on Covid-19, World Health Organisation) on this evening’s Sky News who summarised at the end of his interview as follows;

‘’…I would only be making remarks about how serious this is if I had a very good reason to do so. I am concerned. This is serious. I don’t like comparing it to last year. For me this is unprecedented. I don’t know how serious it is going to be but I really do appeal to everybody. Please take what I say seriously. I’m not speaking with any political message, I’m not speaking with any idealogical message. I’m just speaking as a public health doctor, who is looking at the signs and listening to the experts and I think we have a pretty serious problem in the coming weeks. It’s not just in the UK, it’s in many other countries.’

So who to believe?

Yes, you are of course right.

(edit - it turns out the South African scientists think vaccinations enhance the t-cell response as well as the anti-body response, as would be the case with actual infections. This is good news because Omicron evades anti-bodies (the anti-bodies would prevent the initial infection) but t-cells prevent severe infections and hospitalisations. Because Omicron evades anti-bodies, most people will catch it - hence the recent rise in daily infections in the UK - but hopefully hospitalisations and deaths will not increase in line due to vaccination. Omicron infections should peak in January and start to decline rapidly, they say)

However I watched Dr Campbell throughout 2020 and he was spot on.

Anyway, IMO the end game is a specialisaed vaccine will be available in months for O, so if one’s investment horizon is 5 years or more O is irrelevant from an investing standpoint, unless invested in the airline or hospitality sectors, due to the risk of going bust.

And I’m not saying don’t hold more cash, just there are real risks to doing so.

No-one will know the real answer until mid-January.

P.s. I just saw this

Fauci: 'No need' for Omicron-specific booster

Dr. Anthony Fauci said Wednesday that the new Omicron strain of the coronavirus would not require a variant-specific booster, which would have meant a fourth dose of the vaccine for some Americans.

Dr. Anthony Fauci said Wednesday that the new Omicron strain of the coronavirus would not require a variant-specific booster, which would have meant a fourth d…