A quick look at Learning Technologies (LTG). This software business has grown by acquisition during recent years. Revenue was £14.9m during 2014 and was £130.1m by 2019: 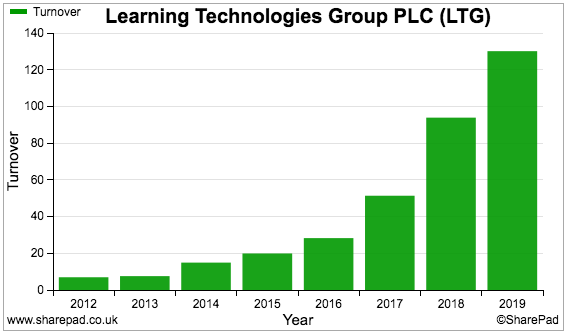 With such ‘buy and build’ strategies, shareholders ought to consider whether revenue is growing organically (good) or whether more recent acquisitions are hiding sales shortfalls from older deals (bad).

Annual reports ought to disclose the financial effect of acquisitions.

The relevant note from the 2019 annual report is shown below.

The relevant notes from the 2014 to 2018 annual reports are shown below:

I must admit these sums do not suggest LTG has delivered notable organic revenue growth. Mind you, most of the acquired sales were purchased during 2018 so may not have had time to deliver. Currency effects may have been an issue, too. At least LTG’s revenue is not less than my £127.6m calculation.

LTG acquired Open LMS for $32m earlier this year, so the sums will have to be revised when the 2020 annual report is published.

Indeed. LTG’s organic growth figures are relatively benign (edit: poor). And if you back out 2017, seems like it’s actually been negative. The 2019 figure excludes civil services contract and PeipleFluent so it’s a really distorted figure.

The other issue is that PeipleFluent, which was a sizeable acquisition, seems to have been a shrinking business as well.

The company claims that they will turn PF around. Time will tell.

LTG, an Edtech business. Interesting company where Andrew Brode, now getting on a bit but having already created a lot of value at RWS, is chairman with c15% of the company as largest investor and the CEO, Jonathan Haskell has another 9%. If company forecasts are to be believed (see 4traders) it’s on the lowest rating for a long time a year or two out though this includes a very recent and materially large US acquisition. So we have two insiders with a lot of skin in the game, one of whom has an impressive track record. I don’t much about the CEO. Looks potentially interesting though hinges heavily on the big acquisition and ask those integration cost savings and cross selling opportunities… anyone here dug into this one or have a current position? Cheers and happy new year everyone.

Interesting company where Andrew Brode, now getting on a bit but having already created a lot of value at RWS, is chairman with c15% of the company as largest investor

I think Mr Brode is the main attraction. Conversations I have had with other investors about this stock always start with them mentioning him.

A very acquisitive business, with a recent deal that will make the earlier financials rather academic

LTG bought GP Strategies for £284m, which was a lot of money when adjusted EBIT was running at £44m a year.

Rationale is prospect of improved margins:

This latest purchase should therefore double the profitability of the group.

LTG took on debt and issued shares to fund the deal, which is not exactly the Halma way of doing things:

Hello, I recently read a presentation by David Barber of Halma, who co-founded the company in 1972. It dates from 1997 but is still relevant today. It highlights (amongst other things) why a buy and build strategy works in practice to create shareholder value. This is partly why I personally believe HLMA is a quality business and may remain so over the longer term. david-barber-halma-strategy-speech.pdf (maybe start from page 4 because he initially refers to charts which aren’t provided). Mr…

Mr Barber believed that to create value for the shareholder, any company purchases should be;

It’s not a stock for me, but I would welcome other views. From an earlier look I was not convinced LTG was generating much organic growth:

I must admit these sums do not suggest LTG has delivered notable organic revenue growth.

15.5 million management options will come good if EPS and/or total shareholder return deliver CAGRs of 10%-plus over the next 4-5 years, with a maximum payout at 25%pa. Presumably that shows what the directors believe is possible.

I guess this stock boils down to whether your trust the board to deliver or not, as deciphering the group’s financial performance is difficult given all the deals. Share price now is 177p.

Hi Snazzytime - thanks for this update.

So another year almost over and a disappointing 12 month performance against my benchmark of FTSE All Share. At the time of writing my portfolio is up 7.06% v FTSE A/S up 14.17%. All was going ok up to the end of July with a 12.33% gain v FTSE A/S 9.71% but the subsequent pullback in small caps has hit me hard with the two biggest detractors being BOO and JOUL. So much for letting your winners run! These two combined caused a portfolio reduction of over 5% and wiped out all the gains on both st…

I see LTG in your list of holdings - have you held it long? What’s your current take on it?
Best,
steve

Firstly congratulations on your 2021 portfolio returns which I just read on another thread.

What initially attracted me to the company was the management team. I had been looking at RWS for a while where Andrew Brode has had tremendous success and has a 23% stake worth £585m.

I didn’t buy RWS but that led me to look at LTG where Andrew Brode has a 14% stake worth £200m and the CEO Jonathan Satchell has a stake of 9% worth £130m. Together they have driven LTG since 2007 when they joined forces (JS was already CEO and AB came in as investor). The company was subsequently listed in 2013.

LTG has had a successful growth by acquisition model and have demonstrated their acquisition skills (so far). This type of investment is high risk / high reward with lots of moving parts and accounting adjustments making it difficult to value. Personally I am prepared to back what I view as a strong management team, with proven track record and infully aligned with shareholders. Whilst AB is 81 and is in his later years of life, JS is only 54 so he is likely to be around and driving LTG for some time to come.

Things have recently changed with a ‘transformative’ acquisition of GP Strategies for £284m funded by £82m placing and remainder in debt. This changes the company’s historic operation of small / no debt to an end of year projected leverage of 1.7. Hence the both the risk and reward here has increased.

I am happy to hold to see how this plays out and place my trust in management but am well aware that many ‘transformative’ acquisitions have ended in tears so any early signs of difficulty with this acquisition would likely trigger an exit for me.

Thanks Snazzy. Do you know much about Satchell? He seems to have grown the company’s fcf per share most impressively over the years, and the company is now generating about £50m ocf (adjusting for wc movements) off £150m of sales, suggesting 30%+ margins. Dividends grown at 40% pa and eps forecasts have jumped for 2022 whilst the share price has fallen back so overall I’m encouraged - perhaps worth starting a position at these levels and then waiting to see how the numbers develop in 2022.

Maynard - thanks for shifting my question to the original trail.

Learning Technologies’ history goes back to 1986 when known as Epic, one of the early companies involved in interactive computer based training. In 2007 Jonathan Satchell (a former owner of another e learning group) was brought in to lead the company. Within the next year he teamed up with investor Andrew Brode to acquire Epic which subsequently changed its name to Learning Technologies and floated on AIM in 2013.

You may also be interested in a fairly recent (August 2021) Forbes background article on Andrew Brode which I googled here.