I’ve seen this companies hyped by a few tipsters and I used to hold until they purchased the garden-ware business, at which point I (fortunately) thought they were outside of their zone of competence and it was an example of diworsifying.

Sorry for any holders, today, though. It seems very unfair.

Nevertheless, full year profit before tax and adjusting items is now expected to be below current market expectations and in the region of £9m to £12m notwithstanding any further significant covid restrictions.

Should investors not expect better forecasting than this, despite the (already mostly known) covid issues? Is it Liberum and Peel Hunt’s responsibility as well, though?

Just fyi, e-commerce represents c. 61% of sales and physical stores 17.5%, with wholesale making up most of the difference.

Reasons given for the reduced profit forecast are;

Weaker than expected revenue in January, in part as a result of the negative impact of the Omicron variant on retail
footfall (down 36% vs. the comparable period two years ago);
• Delays to new stock arrivals as a result of global supply chain challenges, resulting in a lower full price sales mix, in turn
impacting revenue and gross margin;
• Lower than expected wholesale revenue due to delayed stock and customer cancellations;
• The continued impact on gross margin of increases in freight, duties and distribution costs; and
• Continued operational disruption, lower productivity, and higher than expected costs within the third-party operated

Distribution Centre (DC). DC costs for December and January were c.£1.2m above expectations, which is more than double compared to the prior year. In the second half of FY22 so far and post peak trading, wage rates have reduced but are still higher than seen in the comparable prior year period 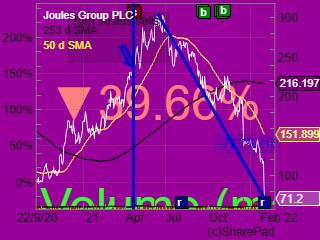 The other thing I noticed was that their IT systems cost £35.3m in total at 30 May 21. It appears fashion companies need to be IT companies and logistics experts as well as experts in their ‘bread and butter’ business. Maybe there is a need for scale, in order to compete effectively in online fashion? Or a need to use Next or Asos, who have scale, rather than trying to in-house these functions.
The company invested £7.5m in IT systems last year. If this is on-going, are they actually making any cash/owners profits? Free Cash Flow is after capex, and cash profitability seems non-existent at present. Maybe the company is investing based on planned future growth. This seems like a large risk to a private investor, though:

Thanks for highlighting JOUL. Looks a messy situation.

Should investors not expect better forecasting than this, despite the (already mostly known) covid issues? Is it Liberum and Peel Hunt’s responsibility as well, though?

Does not take much for profits to drop significantly. For instance JOUL highlights distribution costs rising by £1.2m more than expectations just for two months. So for another six months (H2) that is an extra £3m, which when the earlier profit prediction was £10.5m becomes a material hit. Small drops in revenue/gross margin can have a major effect on reported profit, too, as certain operating costs (such as rent, staff, IT etc) continue to be incurred regardless of sales.

Always hard to forecast the future, and investors just have to live with imperfect management projections and should always take their own view. But certain businesses/industries do seem to be more susceptible to adverse events than others. And you can’t rely on brokers.

Broker notes just seem to react to news rather than try and proactively judge what may happen. Ordinary shareholders must therefore take matters into their own hands to determine whether the omens are signalling bad news ahead.

The half-year results were meant to be published on Tuesday, but shareholders received that trading update instead because more time is required to conduct the ‘going concern’ analysis. Net debt was £21m and profit is now predicted to be at least £5m, so debt is a lot larger than profit and this position is not ideal given the circumstances. Very understandable the going-concern sums are under further scrutiny and the shares dropped by 40%.

Maynard
PS Good spot with the IT expense! £18m I think is still to pass through the P&L.