IFRS16 - lease right of use assets and liabilities

(I’m not going into the cashflow effects!)

What does that mean? Not an awful lot?

If so, I think I preferred the old disclosure note!

What do other people think?

I agree with your thoughts on this.

When calculating net debt it is common practice to deduct long lease liabilities so what’s the point?

I tend to agree with you. It has made a real mess of property company accounts, for example, and I have yet to see the benefits

What does that mean? Not an awful lot?

For CRL, yes not a lot, as the values are similar. But large discrepancies can be enlightening. Hard-pressed retailers and similar will probably show a liability much greater than the RoU asset, as the value of their leases will not be as great as they once thought due to cheaper rents.

Tasty for instance has RoU assets of £40m versus lease liabilities of £55m.: 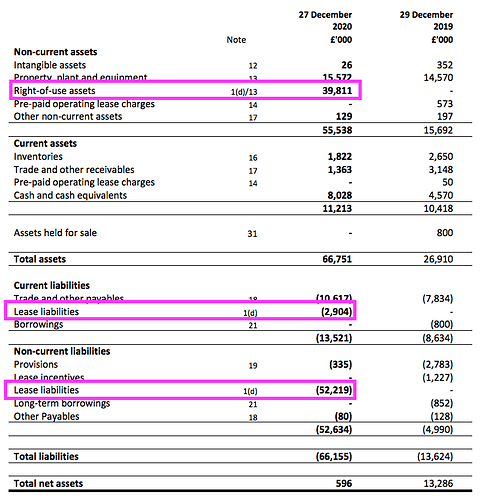 When a lease is entered into the accounts, the RoU equals the initial NPV of the lease payments. As such, arguably Tasty would be able to enter leases for the same properties today for an NPV of £40m, which suggests it’s overpaying by £15m over the term of the leases. Not great.

You can also get the weird situation where the RoU asset is much greater than the liabilities. AIREA for example: 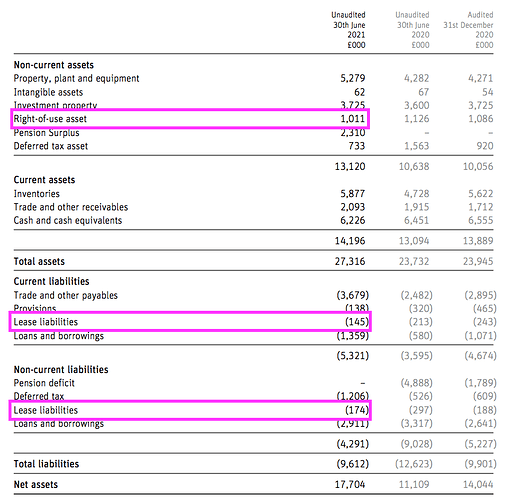 The lease I think relates to machinery, but I can’t work out why the company effectively thinks this asset has a value of £1m to somebody else yet the NPV payments total £319k.

Also bear in mind IFRS16 has an impact on operating profit and NAV, so ROCE etc calculations have become distorted following the new standard.

I think I preferred the old standard, but complaints were made about leases being ‘off balance sheet’ financing. The RoU asset does seem to be accounting fiction, but I guess if you include a new liability, a new asset is required for balancing.

The cash-flow effects are actually the most important, in my view. And don’t the cash payments go through the balance sheet rather than p+l?

The cash-flow effects are actually the most important, in my view. And don’t the cash payments go through the balance sheet rather than p+l?

The cash payments are represented in the P&L by i) the depreciation of the RoU and ii) lease interest or similar within financing costs. There could be a difference between the actual cash paid and what goes through the P&L, but I have not noticed significant mismatches at the share I own. This is not like capitalising development costs, whereby notable cash sums can be expensed through the P&L over many years via amortisation.

At least in the early years, the effects will be on future b/s liabilities. Thanks Maynard yet again for the objective view

Companies with excessively long leases (some companies take on leases for, say, 15 years to get a lower annual rate) then show up as being highly leveraged and with terrible returns on capital, which is as it should be. Long liabilities are a huge risk, especially when the market changes (shoppers move from offline to online) and when rents are collapsing (long leases lock the company into rents way above the current market rate, often with inflation-linked increases).

Obviously it was possible to dig through the pre-IFRS 16 accounting notes to pull out the lease liabilities, but I much prefer having them on the balance sheet.

Thanks for the post and welcome to the forum.

These liabilities are pretty similar to borrowings (the company is effectively borrowing the leased asset) so I include lease liabilities in ROCE and debt-related calculations.

Always a debatable point this. I suppose the difference between leases and debt, at least with property leases, is that the company can sub-let the property (assuming the lease allows it). So the liability can in certain circumstances be offset by additional sub-let income.

The past few years have also shown landlords are open to lease reductions when their tenants are struggling and talk of CVAs arise. Banks tend not to be so forthcoming, and shareholders can end up with debt-for-equity swaps with conventional borrowings.

I think if you add back property leases (and associated costs) for ROCE purposes (i.e. effectively assume the company owns the property outright with no rent), the ROCE result will be lower as owning property typically delivers low returns albeit that lower return is offset by lower balance-sheet volatility.

But I think we can both testify that long liabilities are indeed a huge risk when sales/profits take a turn for the worse!

I agree that in most cases lease liabilities are lower risk than borrowings, if only because it tends to be more atomised, especially in larger companies, with leases spread across dozens or hundreds of landlords who can be negotiated with separately, rather than a small syndicate of lending banks who can take a unified position.

But overall, I think the main point is that investors should at least be aware of lease liabilities and if IFRS 16 makes them more visible then I think that’s a good thing.

I tend to agree with John. Some people are very negative on this accounting change, but prior to its introduction people argued that leases were hidden off-balance liabilities.

Firstly, some comments from PWC:

“ Lessees
• The new standard will affect virtually all commonly used financial ratios and performance metrics such as gearing, current ratio, asset turnover, interest cover, EBITDA, EBIT, operating profit, net income, EPS, ROCE, ROE and operating cash flows. These changes may affect loan covenants, credit ratings and borrowing costs, and could result in other behavioural changes. These impacts may compel many organisations to reassess certain ‘lease versus buy’ decisions.
• Balance sheets will grow, gearing ratios will increase, and capital ratios will decrease. There will also be a change to both the expense character (rent expenses replaced with depreciation and interest expense) and recognition pattern (acceleration of lease expense relative to the recognition pattern for operating leases today).
• Entities leasing ‘big-ticket’ assets – including real estate, manufacturing equipment, aircraft, trains, ships, and technology – are expected to be greatly affected. The impact for entities with numerous small leases, such as tablets and personal computers, small items of office furniture and telephones might be less as the IASB offers an exemption for low value assets (assets with a value of $5,000 or less when new). Low value assets meeting this exemption do not have to be recognised on the balance sheet.
• The cost to implement and continue to comply with the new leases standard could be significant for most lessees. Particularly if they do not already have an in-house lease information system.”

I see a few benefits:

On the downside, however, things are now more complicated. Leasing costs were previously I single line cost item in the P&L, and now they are split into a depreciation charge item (for the leased asset), an interest cost item and an operating expense item.

The example in appendix C of this IFRS document ( https://www.ifrs.org/content/dam/ifrs/project/leases/ifrs/published-documents/ifrs16-effects-analysis.pdf ) is informative.

It shows how EBITDA, D&A and net financing costs all increase, leaving net profit unchanged; whilst the cashflow statement is heavily affected with higher OCF, flat Investment CF and low Financing CF. This is a problem for FCF as a metric since it will benefit from higher OCF but capex will be unchanged since the bulk of the cash cost of leases falls into the financing part of the CF statement. So FCF (standard definition OCF - Capex) risks being overstated now compared to before this accounting change.

It is certainly a good way of making money for accounting firms. I think the benefits are massively overstated for most situations. If a company chooses to go light on capex and rent a property, that makes it a different proposition from a company that decides to buy. The standard blurs the differences in the operating models and risk profiles