My largest multi-bagger to date has been Tristel (TSTL), so that share seems as good a place to start. I have already listed ten lessons from owning 10-bagger Tristel: 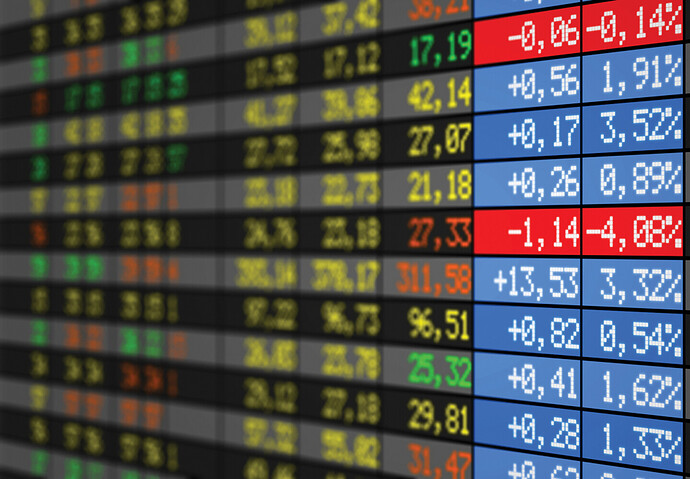 The news from my shares during Q2 was relatively positive. Four of my holdings declared a dividend — which feels encouraging given the payout cancellations experienced generally.

A few quotes from that TSTL blog post on those particular lessons:

The absence of a reliable track record was reflected by the lowly £16m valuation — too small for most investors to bother with… which created the upside potential for anyone enterprising enough to look beyond the shaky headline numbers.

The business carried net cash and was still paying a (smaller) dividend, and therefore was not a complete basketcase.

"During the year, over 1.7 million disinfection procedures were undertaken by Tristel’s proprietary wipe in the 27 countries in which it is commercially available. The Wipes System can fairly be described as having become the principal method of decontamination of nasendoscopes, cardiology and ultrasound probes in those markets it has gained a commercial foothold.”

There are vague similarities between TSTL and System1 (SYS1), a share I believe can multi-bag! 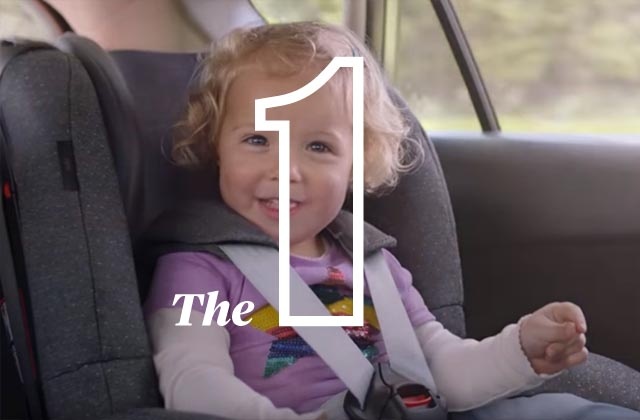 A pandemic-disrupted first half, albeit with headline numbers that disguised a remarkable return to profitability during Q2.

Evidence of a worthwhile product: No clear evidence, but previous RNSs had cited ambitious goals and a service validated by a powerful industry partner:

“Over the last two years, we have reshaped much of the business, automated many of our products, generated increasing industry profile and created a management team capable of achieving our goal to become the world leader in predicting advertising effectiveness. There remains much to do, but we believe that we are further ahead than our competitors.”

“On the strength of the industry attention received by AdRatings, we have announced a strategic commercial partnership with ITV, the UK’s largest seller of advertising space, to support its customers in creating ever more innovative and effective advertising”

Lowly valued, but undergoing a promising transition: The pandemic thumped the company, which had followed a few disappointing years as the business transitioned from consultancy work to automated/data services. The P/E looked to have been 8.

Not a basketcase: Net cash of £5.1m and a possible Q2 margin of 16% suggested the financials were in reasonable shape.

International acceptance: 70% of revenue was already from outside the UK.

So my rough Really Attractive Multi-Bagger Proposition (RAMP) guidelines are:

Evidence of a worthwhile product: Is there something special here?

Not a basket case: Low/no risk of funding issues.

International acceptance: Could revenue growth extend well beyond the UK?

A final guideline could be motivated insider. TSTL’s non-exec chairman was a 27% shareholder when I was buying, while two SYS1 executives owned a combined 30%.

Any thoughts? What have I missed? I would welcome any other guideline suggestions!

Hi Maynard
Interesting line of thought you have here.

Oddly enough I have an ongoing piece of research in progress to look at the profile of mutibaggers over a 3 year period. My database is LSE shares less miners, oilers, investment trusts and a few other odd balls.

It is still at a discovery stage, but I can offer this snippet which you may want to consider.
Have a look at the sectors which give rise to multibaggers.
I was surprised to see only 2 retailers in my preliminary find of multibaggers over this period. Not surprisingly, the highest contributors were pharmaceuticals.
One thought may be not to sweat over the sectors that have not thrown up multibaggers in the recent past?

It is still at a discovery stage, but I can offer this snippet which you may want to consider.
Have a look at the sectors which give rise to multibaggers.
I was surprised to see only 2 retailers in my preliminary find of multibaggers over this period. Not surprisingly, the highest contributors were pharmaceuticals.

Good to hear you are researching past multi baggers. I think for the last three years the pandemic may have unduly influenced proceedings, and I just wonder on a three-year timeframe whether retailers (and other Covid-battered sectors) may outperform.

Longer-term multi-baggers seem to emerge from all sectors. The top performers of the last 20 years are listed below (from this blog post): 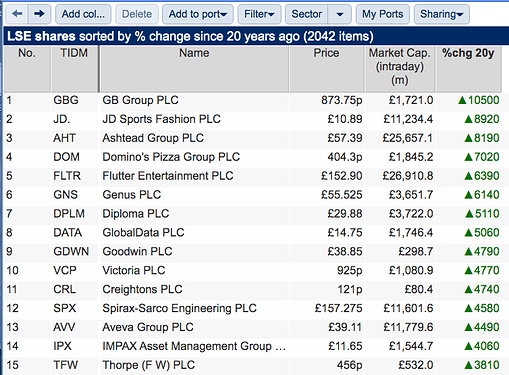 A few engineers and software firms in there, but also plant hire, carpet making, pizza selling and sports retail. Mind you, two of my top five shares are healthcare stocks, and it is hard to deny the healthcare sector has favourable traits for investors as you say. I too overlook sectors such as oilers, miners, banks and insurers for a variety of reasons, so that narrows things down as well.

Don’t forget to let us know if you develop a winning multi-bagger process!

Hi Maynard
Of course you are correct in pointing out that the past 3 years analysis is heavily skewed by the Covid impact. So looking ahead, perhaps some of badly bruised sectors may be candidates for sudden rises in share price? (Boo and Asos come to mind…)
I am actually tackling this problem from a different angle. I am analysing past multibaggers from a technical analysis viewpoint. Are there combinations of technical indicators which can help us reduce the population of shares into a manageable subset?
I know coming up with a formula that exactly identifies future multibaggers is fool’s gold. That will never happen. So the next best thing is to come up with a good hit rate. The noise/ signal ratio if you will. My target is 50% hit rate. That way, I can further reduce the potential subset by applying fundamental analysis.
That’s my starting position. Let’s see how far I get once I start serious analysis and detailed back testing.
Cheers

I think the multibaggers (greater than 10x) that I’ve been lucky enough to hold have mostly tended to display the characteristics you describe Maynard.

JDG & SDI Both have exploited the private/public valuation arbitrage in small scientific companies along with considerably improved multiples over the time i’ve held them. For example I bought JDG on a PE of around 6-8 and it is now on a 30x multiple. They both appear to have quality products with good margins in niche areas.

XPP - Transition from distributor to a manufacturer of power supply units with latterly some growth from acquired adjacent specialist power areas. Industry leading margins in a relatively commoditised vertical. Extremely well managed (although the architect of that success has recently left which prompted me to sell - perhaps foolishly??). Again extreme stretching of valuation multiples has contributed to the multi-bagging. Bought on a PE of around 4, now around 27.

GAW - Transition from a totally unambitious defensive business to one confident in exploiting it’s IP, embracing it’s fan base via social media and developing a fun products that its die hard fans were craving. A new CEO (Kevin Rountree) was clearly the catalyst. They again have a great product and throw off cash to allow aggressive investment in manufacturing (probably have 3x the capacity from when I first purchased in late 2016). They were on a PE of around 14 on clearly ludicrous house broker forecasts on purchase (but around 8x on my own), this has elevated to 25-30 now contributing to the stunning organic growth and operational gearing of the last few years.

From my current portfolio I’d also say SYS1 has the characteristics of a potential multi-bagger. Modest valuation and Mcap, a transition from a consultancy to a scalable platform business with a product (to my untrained eye) that looks highly quality and has grown exponentially and well ahead of house broker forecasts (although the reduction in consultancy has also accelerated!!). It’s not too difficult to imagine it as a £50m revenue company on a PE of 25.

Some fantastic winners there!

This chimes with my multi-bagger thinking – buying on low multiples and hopefully enjoying the double whammy of EPS growth and a powerful re-rating.

The advantage of buying at lower multiples is that you do not have to 100% verify the existence of a true long-term ‘moat’ before buying. You can instead piece together clues about the products/services (as I did with TSTL, and we are doing with SYS1) that a moat is being dug, and take an educated guess as to how events may unfold. Subsequent ‘moat’ investigation can then be undertaken to build ‘conviction’ as the company delivers and the shares favourably re-rate.

Hopefully the lower multiple also limits the downside if things do not work out!

To balance things out I’ve also looked at companies that have greater than 10 bagged since I 1st purchased but I sold out well before they achieved anywhere near 10 bagger status.

2 spring to mind:
Diploma bought in late 2012 for around £3, sold in March 13 for £6.25 after thinking it’d been on a great run as was somewhat pricey for a distributor. Now £32. Another bolt on acquisition growth play but always having a decent rating (I think)

Dechra Pharma which I bought in 2001 for around £1.40, sold in 2007 for £3.25 ish (from memory). Now £49 but held so long ago so hazy recollection but successfully transitioned from distribution to drug manufacture (perhaps similar to XPP).