A quick check on Dignity (DTY). This funeral services group was for years touted as a Buffett-type investment, as among other things:

Group margins were about 30% with crematoria trading margins at 50%-plus. The share price did well until increasing price competition from no-frills operators led to lower market share, lower profits and an axed dividend: 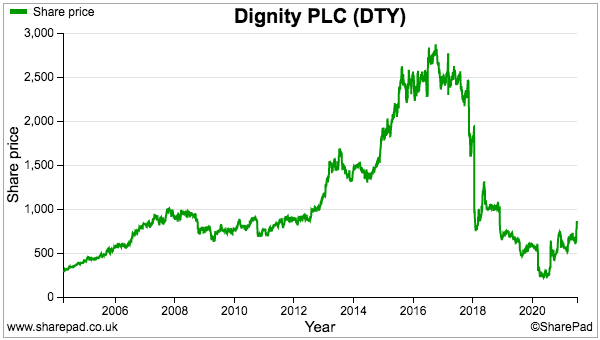 The price has rallied since the lows of last year, in part due to the activism of Phoenix Asset Management. Phoenix presently owns almost 30%, a stake worth £135m, and ousted Dignity’s management at a general meeting earlier this year.

Phoenix first disclosed a shareholding during January 2018 (share price c£18) and owned 27% by May 2019 (share price c£7), when a company representative joined DTY’s board as a non-exec. I don’t get the impression Phoenix has been too successful with its Dignity investment to date with the shares now at £9. 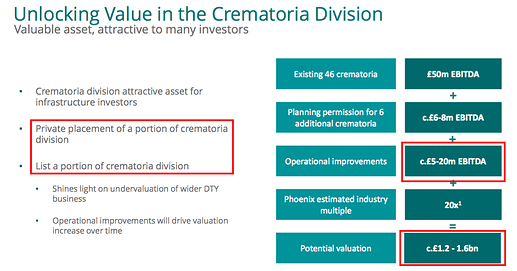 Operational improvements could lead to a divisional value of up to £1.6b, versus a current DTY market cap of £450m. 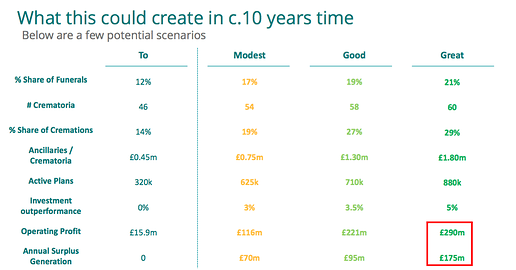 Phoenix outlining its projections is very commendable. Will be fascinating to see how the scenarios match up to the eventual reality. The prospect of free cash flow(?) of £175m in 2031 could make today’s £450m market cap appealing.

But it’s always best with turnaround stories to check the form of those leading the turnaround. I have often found turnarounds can take far longer to turn then anyone ever imagines.

Phoenix’s founder and chief investment officer is Gary Channon, whose bio on the DTY website says:

“Gary’s investment approach at Phoenix is strongly influenced by Warren Buffett and Phil Fisher: long-term, value-based and focused, looking for great businesses run by competent, honest, shareholder-aligned managers, companies with strong pricing power, generating an enduring high return on capital, and waiting for the opportunity to invest in them at attractive prices.”

Sadly full details of Phoenix’s main UK fund are accessible only to certain professional investors. But the fund’s performance is shown below: 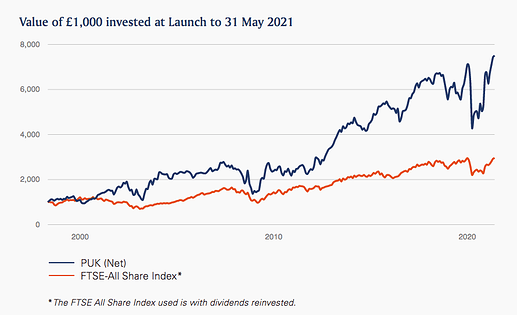 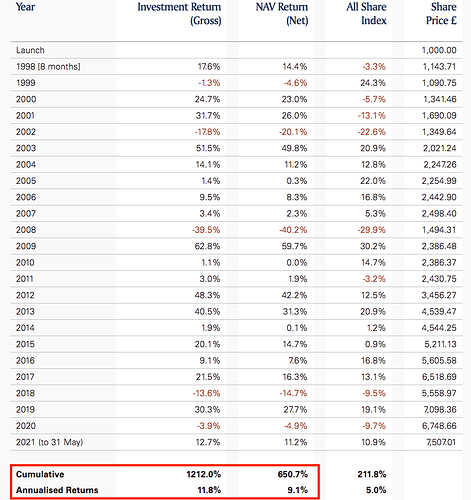 The annualised returns are insightful. Before fees, the UK fund has returned 11.8% annualised, but after fees the return drops to 9.1% annualised. You may think the difference is not great, but look at the Cumulative line. A 1,212% compounded return has been reduced to a 651% return – i.e. almost half of the gross return has been eaten away by charges!

The Phoenix UK Fund has an annual management fee of 1%. We earn a performance fee of 20% of profits once the Fund has risen by inflation for the year. Inflation is calculated using UK CPI.

Ordinary investors can ride with Phoenix through the Aurora investment trust: 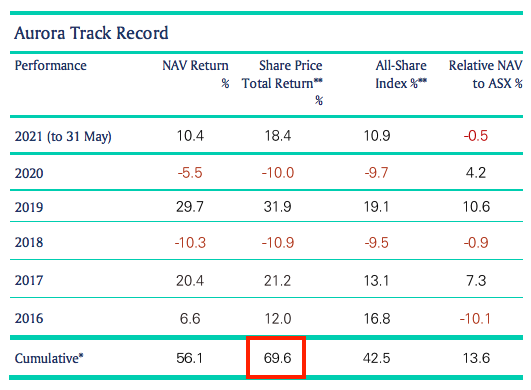 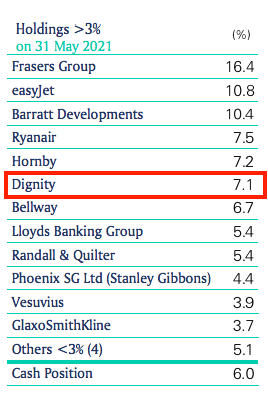 DTY represents 7% of the trust, and the trust is said to be run on the same lines as the main UK fund. But I have no idea whether the holdings and weightings are similar. I must admit, Aurora’s holdings do not all seem to be the Buffett-type holdings that Mr Channon’s bio says Phoenix prefers.

Aurora’s returns are not spectacular. Up 70% in 5-and-a-bit years is c10% annualised. My own portfolio is up around the same over the same time, and has outrun Phoenix’s main UK fund over the last 20 years (c15%pa vs c9%pa, albeit with me managing much less than Phoenix!). So the returns evidence does not suggest Phoenix has a Fundsmith-type magic touch.

Unfortunately I can’t say the holdings and performance of Aurora inspire me to look further into Phoenix, or indeed look any closer into DTY. Which is a shame, as I do have a lot of respect for activists who are happy to fight management in public and take executive charge. Clearly Phoenix’s interests are aligned with those of other DTY shareholders, so the longer-term omens for DTY ought to be positive… but are they positive enough?

I think that a spin out of the Crematoria business is a very good idea. There will always be a demand for them and I suspect that they will grind out utility like returns.

I held DTY for quite a while and sold out once it ran into turbulance. Not sure that I am brave enough to go back in at the moment.

Those management fees by Phoenix are a good example of why PI’s like to manage their own money.

This was one of Keith Ashworth-Lloyd’s favourites, until the moat appeared to be a case of the emperor’s new clothes, and price-cuts were necessary to stop competitors eroding their market position. (not dissing KAL - I wish I was as clever as he clearly is!, but pls see the chapter in his book).

How have Dignity solved this moat problem? I can’t see they have. Without a moat, economies of scale can only take the company so far. It isn’t like a SDI or Judges buy and build because the technical knowledge to operate the business isn’t hard to replicate and I don’t believe that there are a limited number of licences available to funeral parlour start-ups.

The elephant in the room is debt. Long term borrowing is at £600m and has been for a while. For a market cap company of £443m, this is clearly too high.

Potential valuation of £1.2bn - 1.6bn is enterprise rather than market value, imo, if only because the definition of fcf generally excludes interest payments -take the 600m of long term debt from their valuation estimate that gets us to £0.6bn-£1bn against current valuation of £0.44bn, not quite so appealing for the risks involved.

AVOID IT’s with any sort of performance fees, also!!

To be fair to KAL, he did say on a PI World webinar once that if he could rewrite any part of his book, it would be the Dignity bit. Book was published only in 2016, which shows just how much can change in a few years for a LTBHer.

Agreed on the debt. Underlying finance costs were £25m last year, versus an underlying operating profit of £56m. So not a lot of room for manoeuvre should the recovery hit a problem. (Small-print says £823m would have been needed to clear the secured notes at the 2020 year end!) Balance sheet entries includes monies from prepaid funerals, which can be refunded. There’s also a pension deficit. So a lot going on, which is not ideal. As you say, best to consider any dilution and to use enterprise value. Presentation gave projected profits but I can’t recall any mention of the balance sheet, which may be deliberate.