I would be interested in hearing delisting war stories and would hope this would be of interest to others.

I have not been stung yet but came close a couple of years ago when I was looking at buying shares in Shore Capital which seemed undervalued to me. Funnily enough the main issue for me was I didn’t trust Howard Shore so I had put it in the too difficult pile, and a couple of weeks later they announced a delisting without any tender offer to shareholders, sending the share price down 25% to boot.

I then baled on Abbey Plc where management had 85% of the shares and had been steadily buying back shares for years, because they would not give me a straight answer as to their intentions. In the end they did delist and made a tender offer at a slight premium.

It is the double-edged sword of insider ownership. If it gets high enough then insiders can often hit the 75% voting threshold required at a meeting of shareholders, especially if hastily convened like in the case of Shore Capital.

Not all countries allow delisting without a tender offer and some require a fair premium. It puzzles me that the UK doesn’t.

I have yet to see any research or database of delistings but it certainly would be useful. In the meantime, it would be insightful to hear people’s war stories to understand how common mistreatment of minorities has been.

I had /have FQM (as I recall First Quantum Minerals?) they were UK listed but something happened when I wasn’t paying attentin and missed the corporate action note I guess. They are now in an account, almost worthless and my broker doesnn;t seem to be able to get rid of them for me! 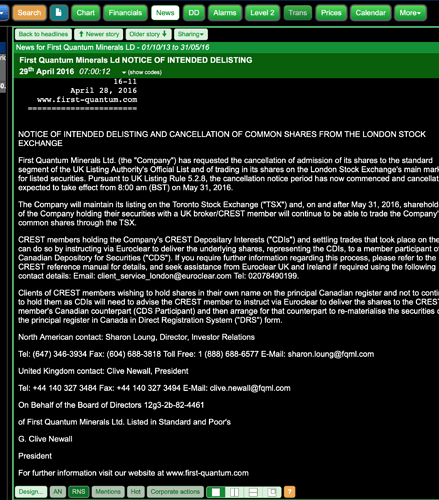 I have yet to see any research or database of delistings but it certainly would be useful. In the meantime, it would be insightful to hear people’s war stories to understand how common mistreatment of minorities has been.

I have experienced two delistings in the last few years: Daejan and Oleeo: 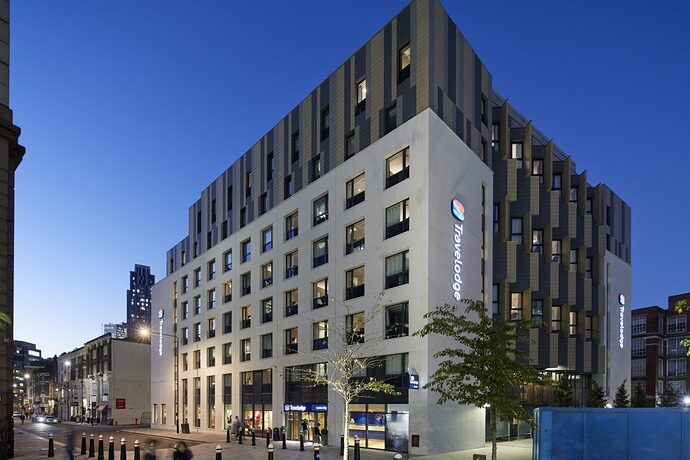 The statement revealed fresh first-half records for revenue, up 12%, underlying operating profit, up 7%, and net asset value, up 4%. 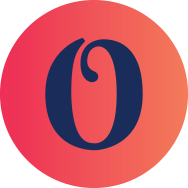 A bombshell tender offer and delisting proposal overshadowed details of the 2019 results. I have tendered my full holding and recorded a 30% loss.

Both companies were c80% controlled by the directors and associates.

Daejan offered a decent c50% premium to the prevailing share price and I think the price was an all-time high. The board commendably saw the cash bid through during March/April 2020 when the pandemic perhaps could have triggered a revised deal via some small-print. I am now happy the business was taken private as commercial property post-pandemic may no longer be as attractive as it was before. And Daejan’s shares always traded at a decent discount to NAV, which would certainly be the case in given events since the offer.

Oleeo on the other hand tabled an offer at the then share price, which was at a five-year low. Certainly the offer was not generous, as cash almost covered the market cap at the time.

I attended an Oleeo AGM was not really made to feel welcome, which perhaps should have told me something. On the other hand the Daejan chairman happily answered many AGM questions, which was always surprising (but welcome) given the company’s terse RNSs. The Daejan directors wanted to go private due to greater corporate-governance requirements.

So yes, hefty insider ownership is a double-edged sword: invest as a minority in a potential ‘fiefdom’ and risk being steamrollered into a low-ball offer. Of the shares I own, I think Andrews Sykes is most at risk of a delisting with its c90% controlling family. If you get involved with these types of shares, you have to accept this particular risk and position-size accordingly. I sense Best of the Best could be a possible ‘opportunity’ for a knock-down delisting. Probably worthwhile to meet the main shareholders in person to get a feel of the delisting risk. I have asked the ‘why are you listed’ question at the Daejan, Oleeo and Andrews Sykes AGMs.

I bought into One Horizon just after it announced that it was delisting and the price had tanked due to all the forced selling by shareholders who did not want to be stuck owning untradable shares in a private company.

Management said it would try and match private sellers and buyers and its ultimate intention was to relist on Nasdaq so I thought I would see whether this was a kind of special situation I could profit from. I only wagered a relatively small amount of money.

I did profit. IIRC I doubled my money in a couple of years, but I have never had the appetite to do it again. After it delisted the company recapitalised a number of times. I completely lost track of how many shares I owned and my regular retail stockbroker was no help until the company relisted on the US OTC market.

I was so uncomfortable I sold the shares I was told I now had, although I believe it did ultimately list on Nasdaq and maybe I could have made more!

I tried my hand at a bit of activism a few years ago. Fletcher King, a commercial property consultancy and fund manager, was trading below the combined value of its large cash balance and interests in 2 property syndicates – around £4m. The founding executive chairman had 15% of the shares.

So I bought a small stake and got onto the chairman whilst also writing to 3 large shareholders with stakes of roughly 20%, 10% and 5%, saying the company should be buying back shares. Mr. 20% said through his rep he supported the Board. Mr. 10% called me to discuss but gave nothing away. Mr. 5% was supportive but remained passive, having gotten nowhere himself previously.

My correspondence with the chairman then followed a typical pattern. My first email was ignored. He responded to the second saying he had no record of having received the first and could I send him proof of my shareholding, which I did (but which of course should not be a prerequisite). He then responded saying he was limited in what he could say to any individual shareholder and then went on to say that he understood I felt the company’s excess cash should be distributed to shareholders. Well short of hacking my emails, there was only one of three ways he could have known that!

I attended an AGM and also tried to rally enough support to circulate a resolution but that got nowhere so I sold out, luckily before Coronavirus.

Fast forward to July 2021, the business has sold its interest in one of the property syndicates and is still trading below NAV, with most of that in cash. It responds to a rumour that it is in talks, the share price pops a little, and then in October 2021 it announces the sale of a 29.9% shareholding to Elliot Bernerd at 60% above NAV. All good so far, except David Fletcher and 2 of the 3 large shareholders from above would be selling over half their stakes into the placing – with Fletcher going from 15% to 6.5%. No prizes for guessing which 2 of the 3 other large shareholders were invited to the party!

This is of course unfair to other shareholders who should have had the chance to tender their shares at the same price on a pro rata basis. It is clear that this is the sale of the business – Fletcher King didn’t need the cash from the placing shares - and that Bernerd wanted and now has effective control of the business, without having to buy out other shareholders by remaining just under the mandatory offer threshold of 30%.

There is in my view the seeds of a lawsuit in this cynical transaction if only it were worth the time and effort. In the meantime, I continue to despair at what insiders are allowed to get away with.

I tried my hand at a bit of activism a few years ago.

I tried my hand a few years ago, too, although not on the same scale. I used to own shares in French Connection, a perennial value play that under the right leadership could have turned around and multi-bagged.

But the intransigent chairman/main shareholder was (seemingly) happy to run the business into the ground: 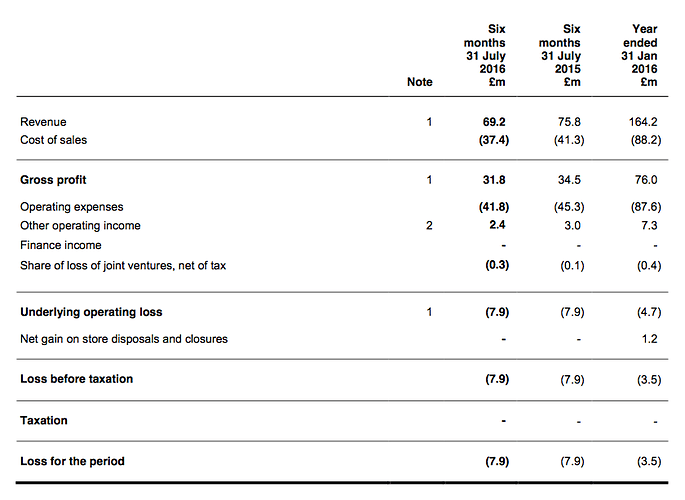 Maynard Paton | French Connection: I Have Finally Given Up On This Turnaround

Like you, writing to the chairman (outlining the requirement for fresh operational management) required proof of shareholding and ultimately fell on deaf ears. A city fund tried to stir up a revolt at the same time, but failed as well. Took another 5 years after I sold for the chairman to eventually sell out. Hard lesson I learned is minor PIs have little chance of instigating change against embedded executives with notable shareholdings. Best to invest with management on your side.

This is of course unfair to other shareholders who should have had the chance to tender their shares at the same price on a pro rata basis.

Not quite sure on the rules here. I believe if the company was tendering for its own shares, a pro-rata offer would have to be made to all shareholders. But any investor can I guess agree to buy shares from another investor – and not be obliged to buy any shares from anybody else. There was a case at AIREA a few years ago when the CEO sold all his shares to the employee benefit trust, which seemed rather cosy at the time and sure enough the shares have since lost two-thirds of their value. With Fletcher, at least the share price trades at the 52.5p placing price, which allows smaller shareholders some sort of similar exit (albeit with costs, spreads etc).