Pitch Capita to a roomful of investors these days and you are likely to empty it pretty quickly. So let me get to the numbers straight away:

This translates into a 3x P/E. If I am right about the debt and Capita’s normalised earnings, then this is cheap. So let’s look at those two things.

Net debt (excluding lease debt) was £430m as of 31.12.21. Since then, they have received £210m in proceeds on 2 further disposals. I estimate the remaining businesses they have slated to sell will fetch around £200m – in aggregate these have £338m of turnover and £27m profit before tax.

This leaves £20m net debt, to which I make some adjustments of my own.

First, pensions. They are currently in accounting surplus and have agreed reduced contributions of £30m p.a. for 22/23 and £15m pa for 24-26 for total of ~£100m. I believe the pension surplus will only increase, as increases in the discount rate following interest rate rises will more than offset the effect of increased inflation on the pension liabilities.

Second, working capital unwind. They have a very big deferred revenue balance. This is because on contracts where they are doing upfront ‘transformation’, the client funds the upfront costs but this cash is booked as revenue over the contract life. As older transformative contracts have not been replaced as quickly by newer ones in recent years, this balance has been unwinding, however they are forecasting that this has largely run its course mainly because they are winning more new business. In 2021, the working capital outflow due to deferred income unwind was around £130m and they forecast ‘half that’ in 2022 and improving beyond that. I have no idea what the right number is but let’s say there is £150m further unwind to come.

Putting all the above together gets to £270m net debt pro forma. Note that this is the number I am using for valuation purposes and that their actual debt position for covenant purposes will be better than that.

What other nasty surprises might be lurking to increase that number? The big unknown with contractors is problem contracts. But Capita has been in restructuring under turnaround CEO Jon Lewis for over four years now and say these are now dealt with. That seems plausible. It also seems plausible that contracts agreed since he took over won’t have these problems. Why? Firstly, they have centralised bidding decisions to an investment committee that he oversees. Secondly, there has been less competition, as public sector contracts in particular have become unattractive since the various failures for eg Carillion, rail franchises, etc but also because the Government actively disqualifies unsustainable bids.

I am not saying there will be no further nasty surprises - I have no idea. It is why I never buy shares in contractors and think them suitable only for private equity where you can diligence the contracts properly. But, 1. I think this risk is much less likely now, and 2. If you believe the normalised earnings (to follow, below), then there is significant margin of safety to absorb any further nasty historic liabilities.

What are Capita’s normalised earnings?

Capita has a significant market position in both its core businesses

Capita operates in the UK only and is the largest player in both its continuing segments, ie Public Service and Experience, which are both in large and growing markets.

Public Service (£1.4 bn turnover 2021): Despite the various scandals and difficulties amongst government outsourcers from Carillion to rail franchises in recent years, Governments need outsourcers and have always relied on the private sector to provide services. There is also a rational expectation within government that they must make a reasonable profit. Capita’s order book and pipeline are holding up and now back to growing. It continues to be the largest supplier of business process services to the UK Government and it continues to win and renew business.

Customer Experience (CX) (£1.2 bn turnover 2021): Capita has been in the business of outsourced customer service - call centers typically - for over 40 years and is the largest provider in the UK, with the market forecast to grow at 5% p.a. Its revenue retention rate was 97% in 2021 and it is winning new business with existing and new clients. It compares very favourably to peers as judged by industry analysts.

Capita’s current margins are not a good indication of its potential. Capita earned around £75m in operating profit in 2021 on continuing operations, £98m in public sector on turnover of £1.4 bn, £69m in ‘Experience’ on turnover of £1.2 bn, less £52m corporate overhead and less £38m to adjust operating profit for lease costs, as I am using pre IFRS-16 numbers (adding back right-of-use depreciation and subtracting lease interest and capital payments). That equates to an operating margin of 3%. Not all that operating profit was cash profit because of the deferred revenue unwind, which I dealt with above in ‘Debt’.

Let’s instead look to peers to see what its potential is over the medium term:

Let’s assume in the next few years Capita gets to 5% operating margins in public sector work and 8% in Customer Experience, on current turnover levels that would equate to a blended margin of 6.4% and operating profit of £165m.

What could Capita be worth?

Serco now trades at just over 8x EV/EBIT and peers in the CX space trade anywhere from 12x EV/EBIT for Majorel to 22x EV/EBIT for Teleperformance. Let’s assume a 8x multiple for Capita’s public sector business and 10x for customer experience with for the sake of simplicity a 50:50 split, yielding 9x blended multiple.

This also assumes no growth in revenue and that Capita is underearning vs peers.

Let’s assume it takes 3 years to work out, ie for the market to wake up to this and rerate the shares accordingly, that’s still a 50% p.a. return.

Many thanks for the super write-up. A quick look at the accounts does not show a straightforward situation! Just looking at the pension for now…

First, pensions. They are currently in accounting surplus and have agreed reduced contributions of £30m p.a. for 22/23 and £15m pa for 24-26 for total of ~£100m. I believe the pension surplus will only increase, as increases in the discount rate following interest rate rises will more than offset the effect of increased inflation on the pension liabilities.

The 31 March 2020 triennial valuation of the Capita Pension and Life Assurance Scheme (the Scheme) was concluded during the year and identified a deficit for funding purposes of £182.2m which is expected to be recovered through agreed deficit contributions of £105m across 2022-2026 on top of the regular pension deficit contribution of £59m paid in 2021.

So yes, c£100m of extra cash to disappear into the scheme that you have rightly added to net debt and the effective market cap for valuation purposes.

The 2021 results do not show the full scheme details, but scheme assets started 2020 at £1,445m and paid yearly benefits of £46m that year. The assets therefore required a 3.2% annual return to fund the benefits, which does not appear horrific especially when the scheme-asset income for 2020 was £27m.

Not sure I would take much notice of the scheme being in surplus, as all sorts of assumptions can reduce the stated liabilities but not influence the actual cash benefits being paid. The 2020 notes show liabilities of £15m being settled by paying £18m…

…which suggests some liabilities may be understated.

Also not sure what to make of c50% of the scheme’s assets being unquoted.

From this quick look, the scheme does not seem obviously underfunded along the lines of Norcros.

Many thank for the kind words and the reply, Maynard.

I agree the scheme does not look obviously underfunded – they say in the 2021 results it is in surplus now on a funding basis - but equally I share your concern there could be volatility in the funding position. I’m not too exercised by the unquoted investments given this is a relatively immature scheme with therefore relatively less liquidity need, and it also needs to try to generate returns. However, half their investments are in risk-seeking assets – corporate bonds, equities, alternatives. In a drastic but plausible scenario there could be a big market correction before the next Triennial valuation in March 2023 which could lead to an adverse deficit recovery plan with the Trustees.

That’s a downside that could absorb a lot of the intrinsic value and margin of safety. Assume the plan has £800m in risk-seeking assets and a 50% market correction, and the Trustees agree 6 years to repay, that is £66m p.a. Perhaps it goes away at the 2026 Triennial valuation as asset values recover, but still. Alternatively, investment performance could do very well from there and they have overfunded relative to the technical provision but cannot recover the money.

The more insidious effect is a constant overhang on the sentiment of the stock, rather than intrinsic value. That’s probably a question of investor time horizon as long as CPI’s profitability is restored and improving. Or they might decide they need to go down the path of funding to a higher liability calculation (eg buyout valuation as used for in-year settlements you cited) to reduce uncertainty around future contribution calls and get the scheme to self sufficiency. That would consume some of the margin of safety, but might unlock a higher multiple than I have assumed.

Let’s assume in the next few years Capita gets to 5% operating margins in public sector work and 8% in Customer Experience, on current turnover levels that would equate to a blended margin of 6.4% and operating profit of £165m.

This £165m does not appear totally outrageous, at least going by an old LTIP scheme: 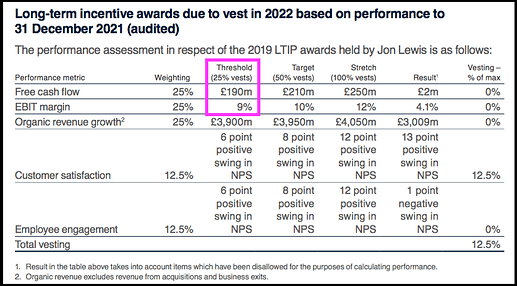 True, the threshold £190m free cash flow and 9% EBIT margin were set a few years ago and various business changes have since occurred. But the targets were believed possible at the time by the board and presumably were thought achievable by the chief exec.

The 36.5p share price underpin compares to 21p today. So the shares need to rally significantly before the 2022 RSA pays out. The 2021 RSA also requires a three-year positive TSR, to 31 December 2023, to vest. The price at the start of that three-year period was 39.2p.

Note the absence of financial performance targets for these RSAs:

"There are no performance targets attached to the RSAs. However, vesting is subject to: (i) continued employment; (ii) satisfactory personal performance during the relevant vesting periods; and (iii) a positive assessment of performance against two underpins (see below).

The underpins for the 2021 awards are as follows:

The question I guess is whether the c5.6 million RSAs granted to the chief exec is sufficient incentive to deliver a share price beyond 40p so the RSAs come good. The chief exec is on £780k a year including benefits/pension, and last year’s £359k bonus was derived mostly from “strategic/personal” rather than financial targets:

PS Difficult to believe that this once-great growth stock currently trades at a level first seen during February 1996!

Ideally Management would have more skin in the game through a good old fashioned shareholding, so they share in the downside, not just the upside. And whilst hurdles are good at insuring against pay for non-performance, they don’t guarantee performance. I believe the recently departed and long-serving CEO of IG Design also had an underpin in his LTIP. All that said, whilst Jon Lewis is making a healthy salary by most people’s standards, his big payday is aligned to shareholders’.