Tesco has received some grief about its board bonuses late: 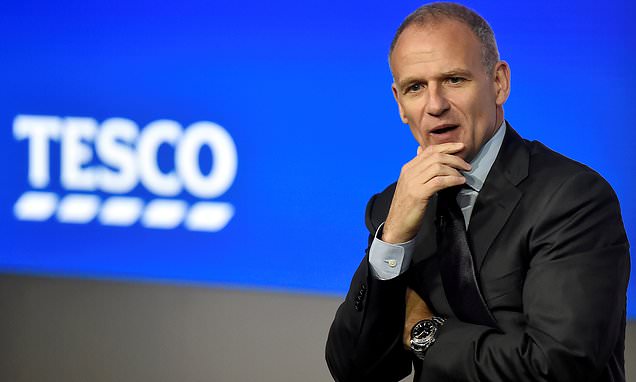 The bumper payday brings his total earnings as chief executive of the firm to £29m since 2014. His pay this year was more than 300 times more than an average employee earning £21,000.

Somebody noticed Tesco’s RemCom re-jigged the comparator group for the TSR element of the CEO’s LTIP:

The re-jig excluded Ocado from the comparator group part way through the LTIP term, due to Ocado becoming ‘technology focused’.

Had the re-jig not occurred, the CEO would have received only c33% of the LTIP shares he did receive.

So the re-jig gave the CEO an extra £1.6m (according to my rough sums and interpretation of these remuneration tables).

Interesting now to look at Ocado and its LTIP.

The Growth Incentive Plan paid out £87m to the executives:

The payout was made because Ocado’s shares delivered a 31% 5-year CAGR: 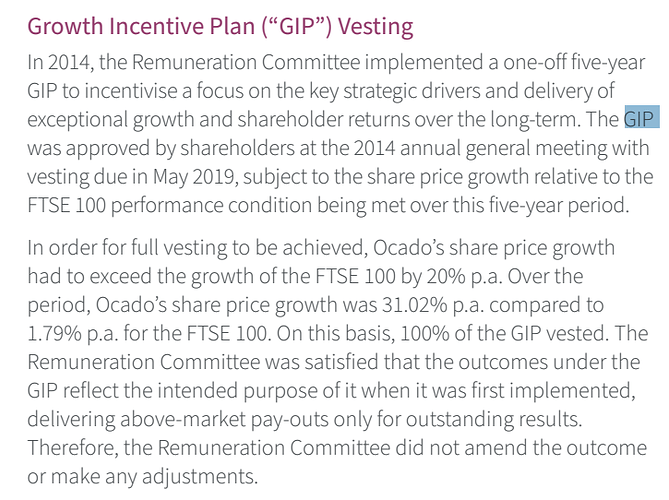 Shareholders gained an extra £7.5b of value during the same time, so the £87m “outcome was fair”: 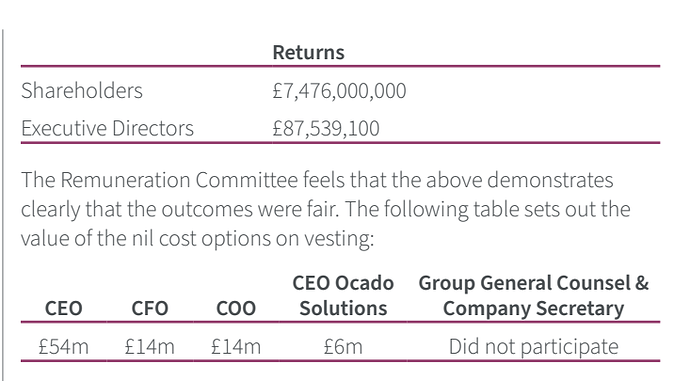 Ocado’s LTIP was measured against the FTSE 100, which perhaps was not the most challenging benchmark.

I doubt Ocado investors are complaining too much about the £87m given their shares are up 31% pa since 2014. But the size of the payout and choice of benchmark might open the door for other RemComs to implement similar schemes – where a successful outcome may not require anything near a 31% 5-year CAGR.

These tales emphasis why I tend to look at ‘owner orientated’ firms – where management own significant shareholdings and are rewarded primarily (like outside investors) by share-price gains and dividends. A bit old fashioned, but I think such firms tend to be conservatively run and therefore not produce too many dramas.

Mind you, Buffett has said something along the lines of “if it ain’t broke, don’t fix it” when it comes to board pay (i.e. if the firm has done well in part by, say, issuing hefty options to motivate employees, then so be it). So maybe investors have to be pragmatic at times. No use investing in a company where the board has no incentive scheme and where the share price in turn goes nowhere.

Perhaps the company’s track record should be investigated before taking a view on any remuneration scheme’s efficacy?

For example I don’t think Tesco covered them-selves with glory with a former CEO, Terence Leahy. We could see roce was deteriorating, despite this Mr Leahy was paid his bonuses whilst running the business into the ground (just my opinion), so it isn’t really a great surprise that the Tesco remuneration committee may still not be aligning executive incentives to shareholder gains again (because they form)?

Generally share options / bonus schemes aren’t a zero-sum game in my opinion - both managers and shareholders can ‘win’ from them. It isn’t the case that one side wins and the other side loses.

As well as the company history, if this information is available I would look to whether the current bonus criterion/criteria are aligned with shareholder gain? (I don’t really know enough about the wording of the Tesco scheme to comment on the exclusion of Ocado, unfortunately).

I would Ignore the quantum paid if both management and owners win just because large pay for directors is a fact of life and out of my control.

Having said that, Ocado validating the payment to managers by comparing it to the total shareholder return would only be valid if the converse were true, i.e. managers had to repay the company should shareholders suffer a capital loss!

(from memory, and I may be wrong, some of the directors of Ocado are actual company founders and previous owners? In which case it would partially explain where they are coming from with such a bizarre comparison??!)