Warren Buffet’s 2020 annual letter is now published (2020 10-K and Annual Report). Always worth keeping an eye on what the old master is up to. I focus on the common stocks that Berkshire Hathaway (BRK) owns, which amateurs like us are able to buy.

This is how Buffett’s portfolio started 2020: 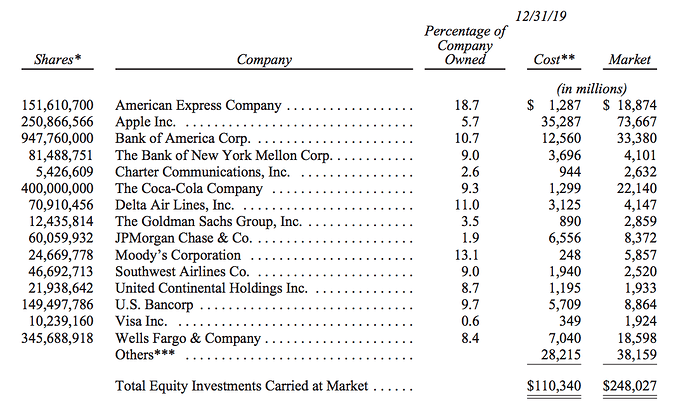 And this is how the portfolio finished 2020:

The stats suggest Buffett sold some (all?) of Delta, Goldman, JP Morgan and Wells Fargo – the latter stock falling 44% last year. Wells was the portfolio’s fifth largest position (7.5%) at the start of the year, so I think Buffett was a significant seller. (I always thought Buffett was a big fan of Wells, but I admit I have not kept up to date with his thinking.)

I am not sure about Southwest, United and Visa. Given their 2020 stock performances, they would no longer meet the top-15 for the annual letter if the holdings were left untouched.

So… should we take notice of Buffett’s big buys?

I have looked through the previous ten annual reports and identified twelve $1b-plus Berkshire investments:

Had you bought at the same price as Buffett, you would have averaged a 53% gain (before dividends) if you held on to today. Only the recent-ish Apple purchases and Johnson & Johnson (way back in 2010) presently look very insightful purchases.

“Last year we demonstrated our enthusiasm for Berkshire’s spread of properties by repurchasing the equivalent of 80,998 “A” shares, spending $24.7 billion in the process.”

“Berkshire has repurchased more shares since yearend and is likely to further reduce its share count in the future”.

I can only assume Buffett (and his investment managers) are struggling to invest a $281b portfolio, and reckon the best value today to be within Berkshire – which Buffett will know more about than any common stock.

Another master class letter from the King. Still shocked how much money he has made so far on the Apple investment. What makes it impressive is the simplicity of the idea combined with his courage to buy such a large position.

Interesting buys were Verizon and AbbVie. Verizon no doubt is play on the 3 headed Oligopoly the US (only has to compete with T-mobile & AT&T).

I am a little dubious with Chevron, maybe he feels the oil price will rebound as travel demand comes back.