I’ve been taking a look at how differentiated these funds are both in terms of performance and their underlying constituents. Does it make sense to hold more than one of these investments and if so which ones?

The first thing to note is that Scottish Mortgage and Long Term Global Growth are sister funds meaning that they have very similar remits, management, and portfolio constituents. The same is true of Edinburgh Worldwide and Global Discovery. There is little value in making comparisons between these pairs, so I’ve chosen to look at the funds and investment trusts separately.

Funds
The three year performance chart shows that returns of the three funds are tightly correlated: 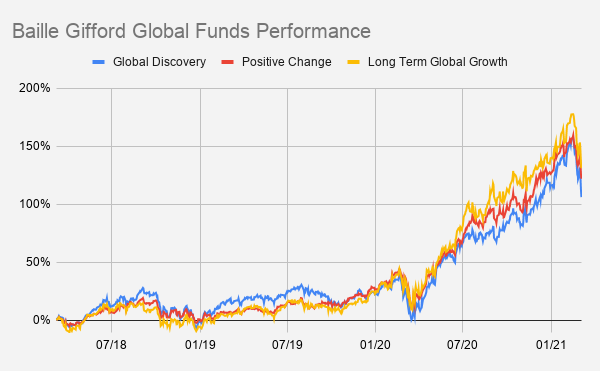 Calculating the correlation based on daily returns over 3 years confirms that it is indeed very high:

* Correlation values range from 1 to -1 where 1 is perfectly correlated, 0 is uncorrelated and -1 is inversely correlated.

What about the portfolio constituents? The table below shows that the top ten holdings of a portfolio made up of equal allocations of these three funds would have significant overlap between funds:

* An x indicates that the stock is held by the fund.

So, significant overlap and very highly correlated performance leads me to conclude that there is little advantage in holding more than one of these three funds. 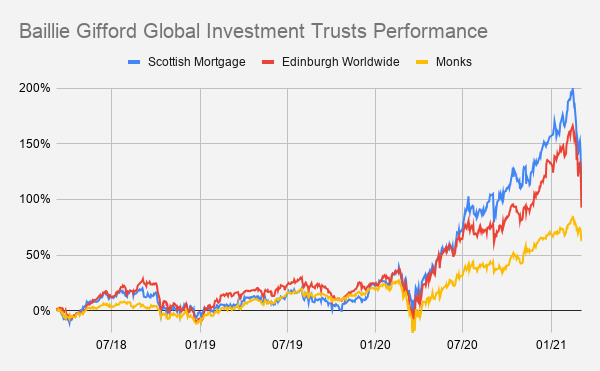 The correlation based on daily returns over 3 years again shows high levels of correlation, but lower than that observed between the funds:

And again there is a significant holdings overlap in the top ten holdings, particularly between Scottish Mortgage and Monks:

Drop down a few more places and more overlap with Edinburgh Worldwide appears:

With significant holding overlap, the lower correlation of returns between the investment trusts relative to the open ended fund range might be more due to the additional mechanisms of investment trusts such as differences in the NAV premium/discount, or the level of gearing employed rather than portfolio differences.

Whether or not it’s worth holding more than one of these three investment trusts probably depends on your appetite for adventure. Scottish Mortgage and Edinburgh Worldwide would both provide that. They have different remits but they offer very similar experiences and I’m not sure that there is enough differentiation to make it worth holding both.

In conclusion I don’t think it’s surprising that the performance of Baillie Gifford’s global growth funds/trusts are strongly correlated and have significant holdings overlap. They all draw on the same Baillie Gifford research to construct their portfolios. There doesn’t seem (to me at least) to be any significant benefit to holding more than one of any of the funds/trusts that I’ve looked at, with perhaps the exception of the Monks investment trust. The larger and more diluted portfolio held by Monks offers strong correlation with its more adventurous peers but with less extreme highs and lows. That could offer more stability (maybe at the expense of longer term performance) if held either as an alternative to or alongside one of the other funds.

Many thanks for the info. Seems petty conclusive the funds all draw on the same BG research. I don’t know whether this correlation presents a wider business risk to BG should that research not prove attractive to investors in time.

Yes, not pretty. I keep seeing Tesla and SMT trending in SharePad… 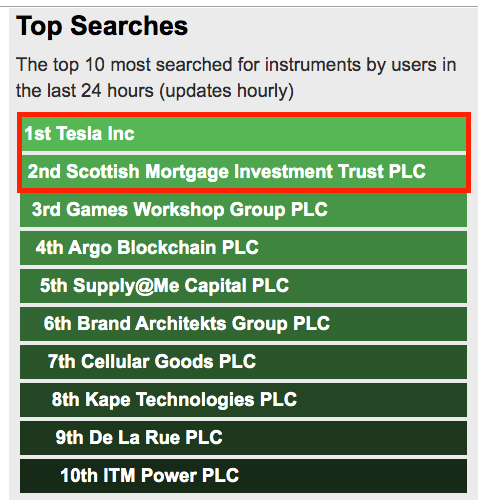 …so clearly investors have taken note of the falls. Declines such as these do test the mettle of holders. Do holders have sufficient faith in the managers? Anecdotal evidence from my network of investors pointed to increased interest in SMT during H2 of last year – and I wonder if that interest has been maintained.

“Tesla has made significant operational progress. It has successfully added capacity and the production ramp of its latest model has progressed far more smoothly than for any of its previous vehicles. Demand for its products is strong and the response from its traditional competitors remains muted. It is still our largest holding even though we sold over 40% of our shares during the period (raising £1.18bn) to ensure that the portfolio has an appropriate level of diversification.”

True, some of these sales may have been forced upon SMT by investment-trust holding rules. But they also show SMT’s managers being prepared to sell a huge winner, which is notable. Too often investors can become carried away with superb gains, not realise the bubbly valuations and hold on grimly into the inevitable downturn. So credit to SMT here – as well as being able to identity big tech winners, the managers are pragmatic enough to bank profits as and when necessary. 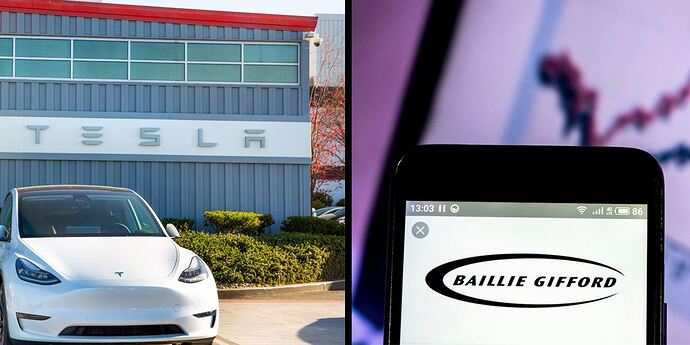 Baillie Gifford managers split over how much Tesla to sell

The managers of the popular Baillie Gifford Positive Change fund have taken a different stance to colleagues at the Edinburgh investment partnership.

“But clearly, the [Tesla] cut that took place in January is significant because it goes beyond trimming for risk or regulatory reasons. This is taking profits due to a weakening likelihood of further stellar gains…”

Many thanks for excellent analysis of a long standing Baillie Gifford issue (the potential overlap of investments in their global growth funds).

I inherited Monks from an uncle over 20 years ago, and for years the trust’s performance was very pedestrian even though for some time Gerald Smith, the fund manager, also held the title of title of Baillie Gifford’s chief investment officer.

In 2015 Smith was replaced by Charles Plowden, another Baillie Gifford veteran, and the trust’s performance took off. Worried about the possibility of a sharp rise in capital gains tax ahead of the Budget, I opted to sell my stake in Monks this year.

I decided against reinvesting in SMT, not just because of its large exposure to the likes of Tesla etc, but because it is very difficult for a trust with a £17bn market cap to continue to outperform. Edinburgh World Wide, with a market cap of £1.4bn, looks a better alternative since it is has a much smaller global cap focus than SMT. However, I am tempted to reinvest in Monks since it is less aggressively positioned than SMT and EWI.

However, my two concerns are that I do not like paying a premium for Monks, and am conscious that Charles Plowden, the architect of Monks’’ recent revitalisation, is due to retire this year.

As a long term investment trust holder I remain a fan of Baillie Gifford, because it is one of the last independent investment partnerships and has a good global record. If one is committed to a Baillie Gifford global trust, which one should it be - Monks or EWI?

Here’s a comparison of a few different aspects of SMT, EWI and MNKS that might help in choosing between them:

* The figure for Monks unlisted holdings includes a 2.3% holding in the Schiehallion Fund of private companies.

Portfolio Construction
SMT is the most extreme of the three with the most concentrated portfolio, the highest average level of gearing and the highest level of unlisted holdings. The number of unlisted companies held by SMT could also increase in the future with the board proposing to move the cap on these investments from its current 25% level to 30%. We also know that SMT and EWI are both prepared to take relatively large positions in companies where market values can be very volatile (typified by their holdings in TSLA).

In contrast, Monk’s has a more balanced and less concentrated portfolio. Its largest holding is just 2.7%, it has the lowest average level of gearing and holds a low number of unlisted companies. As noted by @DarwenLad, all of this suggests that MNKS is much less aggressively positioned than SMT and EWI, (while still having highly correlated returns) which should lead to a correspondingly less volatile share price. This balanced approach has proved popular with investors and it’s worth noting that on a monthly basis, Monks has only traded at a discount once in the last 3 years and that discount was less than 1%.

Performance
Scottish Mortgage has outperformed both Edinburgh Worldwide and Monks over 3, 5, and 10 year periods, despite its much larger size. SMT’s more concentrated portfolio and higher average level of gearing may have been contributors to this outperformance. Whether SMT can keep outperforming its peers in the future however remains to be seen. In a webinar earlier this year the managers expressed the view that SMT’s scale was an advantage rather than an inhibiting factor:

Tom Slater:
If I’m a private company trying to raise capital […] and if there is a potential investor who can write the whole cheque rather than just contribute to the pool, then that is the phone call I will make first. And so, scale becomes a competitive advantage, not just because you can keep the costs to a minimum […] but because you get better opportunities, because you get earlier calls.

Costs
The table below shows the annual cost of ownership of each of the three funds and the impact of those costs on total returns over time (there may be some variation in fees between different providers):

Scottish Mortgage has the lowest cost of ownership with total fees around half those charged by Edinburgh Worldwide. Monks also looks relatively cheap to own, but if we look at the cost impact on total returns based on the historical performance of the three funds we can see that the impact of fees on MNKS and EWI is roughly the same over 3, 5, and 10 years, with the 10 year impact on returns being -4% while SMT fairs much better with an impact on returns of just -2% over 10 years and only -1% over 3 and 5 years. The lower impact of costs on SMT’s returns will have enhanced its already superior performance for holders over the last 3, 5, and 10 years compared to EWI and MNKS.

Management
All three of the funds have low turnover implying a buy and hold strategy. I have been wondering whether these funds are playing a winners game or a losers game. Either way, all three are winning.

I share the concerns of @DarwenLad over the retirement of Charles Plowden, lead manager of MNKS. Even more unsettling was the news this week that James Anderson will be retiring from SMT next year. Baillie Gifford seems to be handling both of these transitions sensibly though with long handover periods and early communication of the changes to investors.

Summary
In my view SMT, MNKS and EWI are all great choices, and as I’ve alluded to before I feel that MNKS offers something different to the other two because of its diversified approach to portfolio construction. For me though, if I had to choose just one it would be SMT because of its high conviction portfolio, strong performance and management track records, and low cost of ownership. May not always make for a good night’s sleep though.

Dear MIA1. Many thanks for your reply which is very helpful. I remain a big fan of Baillie Gifford but was a tad concerned by an interview with James Anderson in today’s business section of The Time (page 38, March 29). He says that one of the reasons for his departure was that the Edinburgh-based partnership was becoming ‘more inward looking, more bureaucratic and less interested in what should have been its core purpose - generating returns for its clients’. He says that out of the firm’s 1,500 people there are only 100 clear equity investors.

Mr Anderson is going to be chairman of Kinnevik, a listed Swedish investment company, which got to know him because Baillie Gifford owns 27m shares in Kinnevik.

As for MNKS v SMT and EWI. Whilst I fully understand your argument for SMT, I think I am going to opt for EWI since it is smaller than the other two, is trading at a small discount, and is not changing Douglas Brodie, its lead manager.