In this recent PIWorld interview, Paul Jourdan of Amati Global Investors mentions a new investment they have made in Alphawave IP Group (at around 48mins): 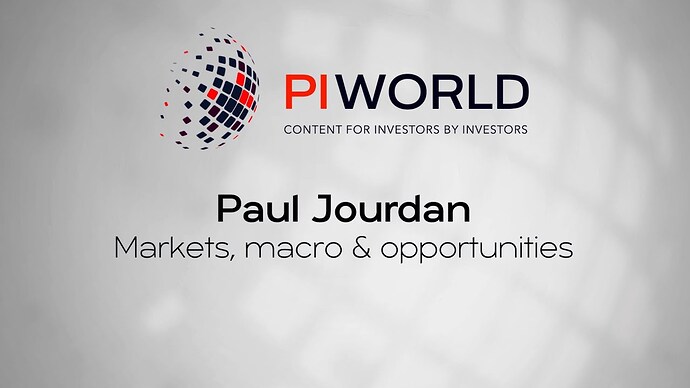 We catch up with Paul Jourdan, CEO & Co-Founder of Amati Global Investors. He outlines the macro picture, which has led Amati to increase exposure to global industrials, particularly ones that benefit from housebuilding and home improvements; he...

Alphawave is new to the market (its IPO was in May). At first glance it looks quite interesting and would probably have passed Maynard’s January IPO filter:

Perhaps worth some further investigation? Here’s a few notes I made from reading through the IPO prospectus:

Business Overview
Alphawave designs and licenses intellectual property to semiconductor and electronic equipment companies. The intellectual property consists of pre-designed blocks of logic that can be integrated with other blocks in the production of an overall microchip design. Alphawave specialises in IP blocks that provide wired connectivity.

The growth drivers in the target end markets are very similar to those targeted by another recent IPO that has been discussed in this forum and include:

The Group also has some big ambitions. From the prospectus:

As ARM conquered the mobile device market with its processor technology, Alphawave IP seeks to conquer the global infrastructure markets with its wired connectivity solutions

Risks
Let’s start with a wealth warning. This is a recent IPO which presents plenty of risks in itself but I think it’s also fair to say that this is the type of company that Terry Smith might avoid. Here are some words of wisdom extracted from the Fundsmith and Smithson owner’s manuals:

Fundsmith:
“….we do not invest in industries which are subject to rapid technological innovation. Innovation is often sought by investors but does not always produce lasting value for them. Developments such as […] microchips and the internet have transformed industries and people’s lives. They have created value for some investors, but a lot of capital gets destroyed for others…”

Smithson:
“…we are wary of industries which innovate very quickly, such as technology hardware. Often companies in these types of industries are ‘running to stand still’ i.e. they are forced to spend high amounts on research just to keep up with competition, rather than being able to extend their lead. They may also be susceptible to a competitor coming up with a better product which could make their original obsolete. This is what we refer to as a ‘catastrophic downside scenario’, and one which we seek to avoid at all costs.”

The Group is engaged in an intensely competitive segment of the global semiconductor industry. Its competitive landscape is characterised by rapid technological change in product design and manufacturing, price declines and customers that make decisions based on a mix of factors of varying importance.

Note the group is not only competing against other third party suppliers but also against internal engineering teams at large semiconductor suppliers.

Still here? Let’s see if we can satiate that risk appetite:

Alphawave has a limited operating history (formed in 2017) and has significant customer concentration risk with only 14 clients as of March 2021. The Group’s largest customer accounted for 20% of revenue in 2020, and almost 50% of all bookings to date have come from the top 3 customers.

On sales, the prospectus states:

The sales cycle for the Group’s IP solutions is lengthy and unpredictable, which makes forecasting customer orders and revenue difficult.
….often lasting six to nine months […] , including while the customer conducts technical evaluations of the Group’s technology [….] Even once an agreement is reached, there is typically a lengthy period, in some cases multiple years, before the customer’s product incorporating the Group’s design reaches market production.

Sales wins do however appear to be reasonably sticky. The prospectus states that across its customer base, approximately 50 per cent of design wins since its founding are from repeat customers.

Opportunities
The Group’s key product to date has been a novel serialiser/deserialiser (or SerDes), which the prospectus states is a:

The big market opportunity for the future though appears to be an industry wide transition from larger integrated circuits to smaller modules called Chiplets. The Group is expecting to see massive growth in this market over the next few years:

And they are expecting an increase in their addressable market on a similar scale:

Note that this huge increase in their addressable market relies on Alphawave being able to successfully produce those future products. The Group’s strategy to achieve this is to leverage their customer and manufacturing partner relationships to gain enhanced visibility of future product directions enabling them to develop proprietary leading edge technology that can be embedded within those products.

Potential Investment Or One To Avoid?
It looks like the market is having difficulty deciding. The Group is currently reporting very strong growth (although the presentation of the financial history in the prospectus is less than ideal - it spans a change in reporting date so that the financial statements cannot be directly compared. Earnings per share on the financial statements also looks odd - presented in dollars not cents and using operating profit as the numerator). The share price has been on a rollercoaster since the IPO, initially dropping around 25% before staging a recovery and then dropping sharply again in the last few weeks. It is now back below its IPO price.

Is this a potentially high reward investment opportunity for those with a high risk tolerance or is it a stock (as the Smithson manual puts it), with a ‘catastrophic downside scenario’, to avoid at all costs?

Many thanks for the great post. Alphawave is new to me.

Alphawave is new to the market (its IPO was in May). At first glance it looks quite interesting and would probably have passed Maynard’s January IPO filter :

I can’t say I really understand the technology, but I get the general drift of the potential ‘moat’ here. What I did not appreciate was the size of this business. I had imagined it was an AIM tiddler, but it’s on the main market with a c£2.3b market cap at 339p. That 54% margin in fact produced a $24m profit from revenue of $44m. Flotation document is here.

This is the CEO’s bio:

Tony Pialis co-founded Alphawave IP Inc. in 2017 and has since served as its President and Chief Executive Officer. Tony has extensive experience as an entrepreneur in the semiconductor industry, having co-founded three semiconductor IP companies, including Snowbush Microelectronics Inc , which was sold in 2007 to Gennum/Semtech and is currently part of Rambus. He also founded V Semiconductor Inc . where he served as President and CEO, and which was acquired by Intel Corporation in 2012.

Tony served as Vice President of Analog and Mixed-Signal IP at Intel Corporation between 2012 and 2017. During his tenure at Intel, Tony and his team won the prestigious Intel Achievement Award for successfully delivering next generation Ethernet and PCIe SerDes solutions on Intel’s 22nm and 14nm process technologies.

As Paul Jourdan noted, the CEO has a record of creating and then selling businesses. AWE’s two other co-founders were also involved with V Semiconductor and Snowbush and are senior AWE managers.

This is the executive chairman’s bio:

"John has been a semiconductor executive since the late 1990s and has founded, funded, scaled and led multiple semiconductor businesses, driving billions of dollars in value for shareholders . He has more than 24 years of experience as an investor and senior executive, including considerable experience in chairing boards. He previously served as Founder, Chairman and Chief Executive Officer of Achronix Semiconductor Corporation and was also a Founder and Managing Partner of Holt Brothers Capital LLC where he managed a portfolio of investments in semiconductors, hardware, robotics, renewables and real estate. John started his career in the late 1980s at NASA Goddard Space Flight Center, where he worked as a design engineer focusing on optics and electronics for remote sensing and LiDAR applications ."

So the CVs stack up. The lead execs are mid-40s, too, so no obvious succession/retirement issues at present. I like how the founders did not require external funding prior to flotation:

After the Group was founded in 2017, Alphawave IP brought together the management team and scaled quickly while securing lead customers for the Group’s first 112G silicon IP in TSMC 7nm, leading to profitability in 2018 off the back of two design wins utilising this technology. The licensing contracts with these early customers, combined with paid in capital by the founders, funded the Company to profitability without seeking any other external capital sources.

AWE has been dependent on initial licensing income: 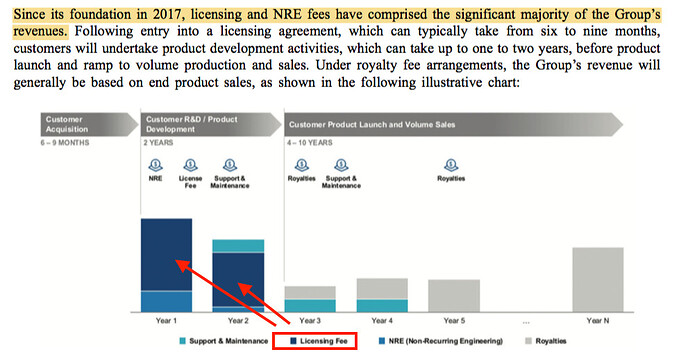 The image above suggests licensing income is significant during years 1 and 2 of the customer arrangement, then disappears to be replaced by smaller maintenance and royalty income. I worry the group’s licensing income could prove to be lumpy and should a few licensing deals be postponed, i) royalties and other income sources may not make up the shortfall, and; ii) reported profits will reduce significantly.

This risk reminds me of Alfa Financial (ALFA), a software business that floated during 2017 and for that year declared revenue of £86m, adjusted profit of £41m and a 47% operating margin.

ALFA’s performance was buoyed by chunky implementation fees, which soon stalled and, two years later, revenue had reduced to £65m and reported profit was £13m. The shares now trade at 150p after floating at 400p and reaching 53p during March 2020. ALFA offered founder management and lots of other positive traits, but in hindsight the IPO was overpriced given the group’s revenue and income profile.