Mr Weschler was outed by ProPublica as having $264m in his Roth IRA at the end of 2018 (a Roth IRA is similar to an ISA).

“each $1 saved as a 22 year old in New York City grew over the ensuing 35 years to over $9,000 – certainly not an expected result, but the sort of example that can hopefully help motivate generations of future savers.”

Turning $1 into $9,000 implies a 29.7% CAGR over the 35 years. Importantly, Mr Weschler said he invested only in stocks other people could also buy.

29.7% a year for 35 years is some going. But apparently one or two UK private investors are on a similar trajectory. Take the Twitter user Glasshalfull1, who reported at the end of 2020 that his 10-year returns equated to a 44% CAGR… 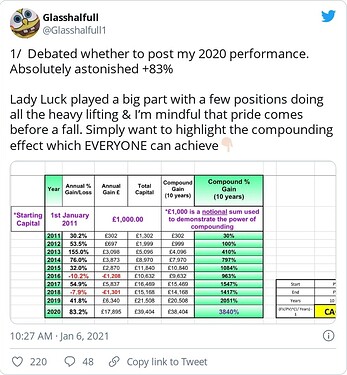 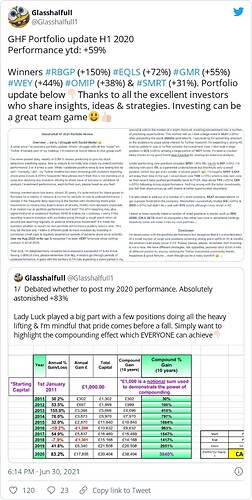 …as well as a spot on the Sunday Times Rich List, your own ProPublica expose and a job offer from Mr Buffett.

Mr Glasshalfull1’s portfolio does seem genuine. The six shares he mentions in that half-year tweet have indeed rallied between 31% and 150%, and he mentioned all of them at the start of the year (RGBP, EQLS, GMR, WEY, OMIP, SMRT): 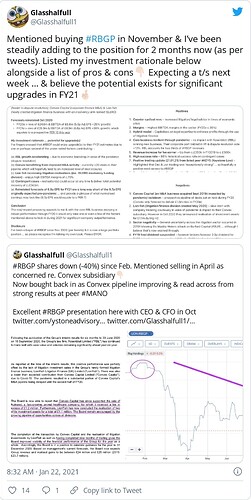 The average gain of the top six winners is 65% and Mr Glasshalfull1 admits the 59% overall gain is a “manifestation of a small number of large core positions achieving strong price uplifts”.

Clearly some good small-cap stock-picking has occurred through a strategy of hunting “companies generally that are reporting strong or “ahead” statements, delivering recurring revenues, improving margins and priced incorrectly”. But I note the returns are amplified by greater trading and reinvestment activity. For example, in that above tweet, RGBP was sold and repurchased five months later at a lower price. And there are quick trades such as this: 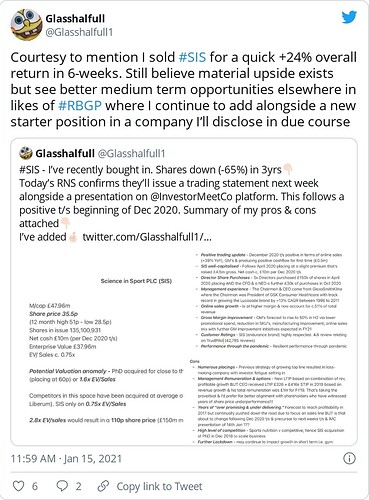 Perhaps that is why I may not feature in ProPublica just yet; I would ride out a share price slide rather than sell out and try to buy back in at a lower price. I’m also a bit picky (too picky?) about which shares I buy.

I don’t know which shares Mr Weschler owns but Mr Glasshalfull1 has listed many of his here: 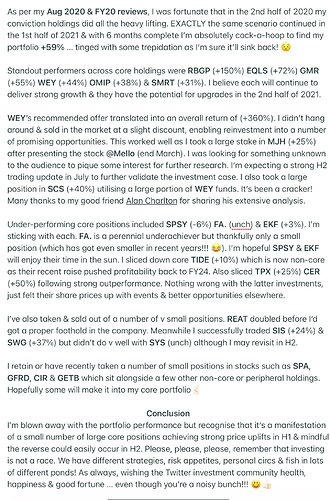 Other stocks mentioned on his Twitter feed include Argentex, Intuitive Investments, Kape and Sportech.

He also buys small ‘starter’ positions, which could help him to spot better buying opportunities in the future. I have never liked the concept of starter positions, but maybe that is something I have also got wrong.

If Mr Glasshalfull1’s 44% CAGR over 10 years is something you aspire to, bear in mind he may no longer post his portfolio updates:

“I worry if this reporting impacts investors with portfolios going through a rough patch when all around are reporting regularly on share-price movement? It’s made me question whether to report my own portfolio performance publicly twice a year. This may be the last one”.

Would be a shame to see his updates cease. But if they do, I suppose in time we could rely on his TR1s through the RNS to keep track of the buys and sells!

I wonder how he characterises himself as an investor? The fact that he says he only really checks his portfolio a few times a year but you mention that he seems to sell in and out of price movements makes me wonder. The 4 shares he lists at the end - SPA, GFRD, CIR, GETB - suggests he likes to ride momentum. I would find it hard to commit money to any of them. Of his big winners, I held WEY but would only consider RBGP, GMR, OMIP but they are not very attractive in terms of financials and look very speculative. Does he report his losers as well?

I wonder how he characterises himself as an investor? The fact that he says he only really checks his portfolio a few times a year but you mention that he seems to sell in and out of price movements makes me wonder.

I think by ‘check his portfolio’ he means calculate returns. Although his half-year summary was posted less than two hours after the market close that day, so I suspect he already knew he had done well. He does mention losers, FireAngel being a notable disaster from years gone by. But as far as I can tell from the last six months, his shares have been mostly winners. I should have added he relies a lot on broker research, which I do not, and which could be another thing I have got wrong.

A couple of things:

Do you not read broker notes or do you simply take it all with a pinch of salt?

Secondly I “follow” glasshalfull but do we know whether the “portfolio” he reports on is entire net worth/his entire investment portfolio or does he have money elsewhere etc. Psychologically all of these factors make a huge difference. Am I jealous yes but …

Thanks for the message and welcome to the forum.

Do you not read broker notes or do you simply take it all with a pinch of salt?

Secondly I “follow” glasshalfull but do we know whether the “portfolio” he reports on is entire net worth/his entire investment portfolio or does he have money elsewhere etc. Psychologically all of these factors make a huge difference.

I do read broker notes occasionally (if they are freely available), but they tend mostly to be reactive rather than proactive – i.e. they revise estimates after bad results, rather than predict bad results are on the way. For a share such as BOTB for example, the broker has retained its forecasts for this year, although investors may be right in undertaking their own estimates following the company’s recent statement. Sometimes the notes provide a few snippets of revealing info, but most of the content is taken from company RNSs, annual reports, powerpoints etc.

Yes, Mr Glasshalfull1 could be investing just £1k and/or maybe his portfolio sums are wrong. We don’t know. I just thought it useful to glance at his approach given the reported CAGR. But UK Fintwit is a bit of a ‘winners club’ and I am sure is not very representative of the wider UK PI universe!

Thank you for replying. I tend to be a bit of a lurker on these sort of forums but try and pop up now and again with a hopefully intelligent comment!

I read broker notes as I do think it increases the sum of my knowledge. For example there was one SLP a while back that gave the bear case for Rhodium, which I thought was very good.

Agree about Twitter everybody seems to be up a percentage point or two every week and since the GFC have compounded there portfolios at a better rate than Warren Buffett and Terry Smith combined. I do tweet quarterly figures but try to be honest.

It seems Mr Glasshalfull is investing far more than £1000 given the following breakdown of his SMRT holding;

If the above is accurate then his overall portfolio must be very sizeable indeed.